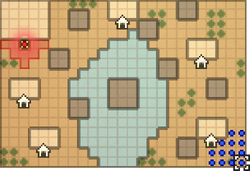 Chapter script
[view]
“With Iago's words ringing in their ears, the group departs for the ice tribe. Iago's meaning becomes abundantly clear when the group arrives in the village.”
—Opening Narration

Lost in the Ice (氷の別離 Kōri no wakare lit. Parting of Ice in the Japanese Version) is Chapter 17 of Fire Emblem Fates in the Birthright Version. This chapter takes place in Ice Tribe Village.

Although Flora is the only initial enemy at first, more will arrive either at turn 6 or whenever the player begins to cross a certain point, which is about the column of tiles in front of the Ice statue in the middle of the map, whichever comes first. The Dragon Vein makes an appearance again and will turn the lake into ice (this is automatically done by turn 6 if you don't). There are five villages along the map; four of these villages are hostile towards the player and will call for troops when you visit them, and one gives 10,000 Gold instead. The village that gives the gold should have a child talking to your units and is the northernmost village; if it does not then it is a hostile village.

To beat the chapter, rout all the enemies on the map. This can be faster if you choose not to visit any of the villages (as you will only need to dispatch the turn 6 reinforcements and Flora), but you will miss out on the 10,000 Gold if you do so.

After you visited the first village near your army at the starting point, 6 enemy units will arrive. A Sorcerer is carrying a 'Master Seal', and an Outlaw is using a Surefire Yumi, both of which can be looted upon defeat.

The second village you visit in the east side of the map, 5 enemy units will arrive. A Mercenary is carrying a 'Spirit Katana' that you can loot.

When you cross the invisible line, a large number of enemies will spawn, including Maids, Fighters, Sorcerers, Mercenaries, Outlaws, and Dark Mages. Keep wary of where they spawn and try not to be tempted to freeze the lake using the Dragon Vein, as this will let you take care of the entire east side of the map before the lake freezes over.

The village located in the north gives 10,000 Gold. If you visit the village at south-west, 6 enemy units will show up. A Maid is holding a Sun Festal that you can loot.

5 enemy units will show up after you visited the village right below Flora. A Dark Mage is carrying a 'Sheep Spirit' that you can loot.

For players aiming for a low turncount, it is theoretically possible to Shove a paired, boots-boosted Kinshi Knight close enough to Flora to enable the player to attack her before any reinforcements spawn at all. The player will have only one round of combat to defeat her, however, and defeating her in this fashion will severely limit the amount of loot and EXP the player can earn from the chapter.

Retrieved from "https://fireemblem.fandom.com/wiki/Lost_in_the_Ice?oldid=468042"
Community content is available under CC-BY-SA unless otherwise noted.