Fighter
[view]
“Then remember that you can never be overly cautious in battle. The best way to stay alive is to always be wary.”
—Lot in a support conversation with Shanna in The Binding Blade

Lot is a playable character from Fire Emblem: The Binding Blade. A member of Dieck's mercenaries, he fulfills the Cord Archetype.

Lot is from the Western Isles alongside his sister Myu, but he joined Dieck's Mercenary crew with his best friend Wade, who joined the war so they could get money for their village. When that happened, Wade's sister, Mary, offered to take care of his mother and sister, but his mother soon died of illness, which made Wade try to convince him to return home so he could take care of his sister, but he refused.

After the war, he returns with Wade to their hometown, and lives a quiet, peaceful life with his younger sister Myu and marries Mary.

Cautious and composed, whether or not this was natural or the result of leaving his family behind in his hometown his personality is undeniably the exact opposite of Wade, as Lot tends to act as an older brother for Wade and Shanna, since he considers both of them to be too excitable and even childish, which leads some to believe that Lot worries too much for a man of his age.

That does not mean he isn't childish himself at times, as when his mother died, he did not tell Wade so that he wouldn't tell him to go back to his sister. Not only that, due to his lack of experience as a mercenary, Lot tends to trust too easily in employers according to Dieck. Lot has learned to play a strategy game resembling chess, but considers himself rather poor at it due to lack of experience.

Description: A young man fighting alongside Dieck. Calculating and cautious.

In the early game, Lot can help with chip damage, either using an Iron Axe or Hand Axe. He's best used to kill soldiers, but with Wade's Hammer, he can help in getting rid of armor knights and with chapter 3's Halberd, he can kill Iron Lance/Javelin cavaliers in chapters 4 and 7, aided by weapon triangle advantage. Past early game, his contributions fall off, due to being an infantry unit that uses an inaccurate type of weapon with average offensive parameters. His promotion gives him huge bonuses in HP, Strength, Speed and Defense along with Bows for Wyverns, but there are better candidates for the Hero Crests, such as Rutger and Dieck.

Lot - Silent Axefighter (寡黙な斧戦士 Kamokuna ono senshi)
"After returning home, Lot married his childhood friend and led a fulfilling if meager life. Although he played a major role in the war, he himself rarely talked about it openly."

Lot is illustrated in the trading card game Fire Emblem Cipher with the following cards: 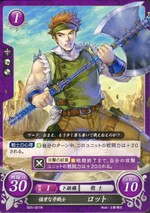 King Lot was the king of Lothian in Arthurian legend and the father of Gawain.

Lot is a Hebrew name that means "veil". In the Bible, he was the nephew of Abraham. He and his wife fled the destruction of Sodom and Gomorrah; however, his wife looked back and was turned into a pillar of salt.

In Dutch, Lot is a female given name, meaning "free man". It also means fate.

Artwork of Lot in Fire Emblem 0 (Cipher) by Karuta Shiki.

Lot as a Fighter in Fire Emblem 0 (Cipher).

Lot's portrait in The Binding Blade.

Lot's battle model as a Fighter with an Axe in The Binding Blade.

Lot's battle model as a Warrior with an Axe in The Binding Blade.