Maureen Price
[view]
“Despite what you may think, I shoot much better than I dance or sing. I believe I can be of some small assistance.”
—Louise talking to Eliwood

Louise is a playable character in Fire Emblem: The Blazing Blade. She is the wife of Pent, Count of Reglay of Etruria,  with whom she mothered Klein and Clarine. She is also the adoptive mother of Erk, and distant cousin of Queen Hellene of Bern, making her a distant relative of Zephiel.

Louise was born to a family of low nobility. When she was 14 years, Louise was gathered among  20 noble ladies, with higher status, up for consideration to marry Lord Pent, the count of one of the biggest houses of Etruria. Rather than developing skills that showed good qualities of a housewife by doing traditionally womenly duties like singing and dancing like the other ladies of the court, Louise instead chose the path of a warrior, learning to utilize a bow. Honing her skills, she developed a deadly ability with the weapon. This, accompanied by her vow to protect Pent regardless of whom he chose. The nobles at the room laughed at her, but to everyone's surprise Pent was impressed by her sincerity and selected Louise as his fiancée, making her the new Countess Reglay of Etruria through marriage.

Years later, Louise and Pent took Erk as their adoptive son when the boy was 12 years old and was found lost in the snow. Louise was extremely happy to have a new companion in the castle because Pent was too busy fulfilling his duty as a mage general and so was rarely home. She doted him with attention and treats, but Erk spent most of his time locked in his room studying and reading books until exhaustion, worrying her.

Louise accompanied Pent on his quest into the Nabata Desert in search of artifacts. Although they are nearly robbed, Eliwood, Lyn, Hector and their army arrive at the desert and protect the two. As thanks, the duo and Hawkeye lead them to Athos and subsequently fight alongside Eliwood for the rest of his journey. When Athos gave the three the mission to find the Shrine of Seals in Bern, Pent and Louise volunteered to join them on this mission to Bern, with Pent being intrigued by the prospect of fighting Nergal.

Being a distant relative but old friend of queen Hellene, she helps Eliwood, Lyn, Hector and the army to reach her safely, to ask her help to access the Shrine of Seals. They achieve that when Louise had a diplomatic obligation in Bern: to attend the festivities surrounding the coming of age ceremony of Bern's crown Prince Zephiel. Through Louise's intervention, Hellene offered to listen to the group's request, on the condition that they go in a mission to find the missing Fire Emblem, which is needed for the coming of age ceremony.

After a visit to Bern Keep, they learn that King Desmond has hired the Black Fang to kill Zephiel, leading to Eliwood, Lyn, Hector and their group being attacked by a Black Fang army, Louise and Pent volunteer to actively fight alongside them, and the couple give him a Heaven Seal, which had earlier been given to them by Hawkeye and Athos. She and Pent continue to serve under Eliwood, Hector, and Lyn for the remainder of the conflict, even blowing off a need to return to Etruria and file a report on the Shrine of Seals.

During the battle against the Fire Dragon, Louise reveals to Pent that she is finally pregnant, news that elates him. Soon after, Louise gives birth to their first-born Klein. Several years later, they also have a daughter, Clarine.  They eventually hire the mercenary Dieck to protect Klein, and raise him as a member of the family.  Around twenty years later, during the events of Binding Blade, a coup was happening in their dukedom, but Louise and her husband didn't care and acted as nothing was happening. Their lax attitude concerned their son, who was more aware of the political situation.

Louise is informal, spontaneous, and gentle, albeit somewhat childlike in nature. Her title as a powerful countess often intimidates the low-born members of the army, but she rejects stiff formality, always assuring that she wants to be treated as everyone else, asking to be addressed by her first name. Too much formality makes her uncomfortable especially because she was not born in a powerful family. She also rejects other people's eventual attempts to protect her, assuring she can protect herself and instead taking the role of Pent's personal protector, as she promised in their marriage vows.

Despite not having very developed skills in traditional womanly arts such as dancing, poetry and singing as expected of most noble ladies, Louise is still very girly with strong motherly instinct, as shown by her disposition of taking orphans to her castle and raising them as her own children, like she did with Erk and Dieck. She is very doting towards her adopted son Erk, despite him feeling unworthy and overwhelmed by her love, and she doesn't care about the nobles complaining of her raising commoners as proper nobles. She always wants to take care of members of the army by doing small acts of kindness like braiding Guy's hair and making Rebecca feel more confident with herself.

She loves Pent, even taking on the role of both his wife and protector, having taken up the bow as a means to catch his attention over his other suitors in the past, though she used to resent the small amount of time they spent together in the castle, finding solace in Erk's company. Despite many other men in the army finding her beautiful, she never once swayed from her feelings towards her husband. As a ruler and mother, Louise is shown to be lax. This is demonstrated by her carefree attitude towards the coup in the territory of her dukedom, the fact that her younger daughter Clarine ran away home bored with her lifestyle, and that Klein was almost killed by a lion in an arena when he was a kid.

Description: The wife of Marquess Reglay. A lethal beauty.

Before looking at anything else, Louise looks like a unit that would not often be used. Her base stats in Skill, Speed and Luck are quite good, although they are hampered by her mediocre defenses and strength, and, most importantly, her foot lock, and lack of 1 range, due to being a Sniper.

While she's not amazing at fighting by herself, she can one-round fliers reliably with a Silver Bow, and Pent helps raise her offense quite a bit. Her support with Pent is actually the factor which makes her a unit you'll usually see in most playthroughs, as she makes Pent's combat even better, allowing him to survive more hits, and one-round almost every generic unit.

While Louise herself may not be amazing, she's a passable unit for flier killing, and she can buff Pent quite a bit, although she still needs to make sure that she's out of range of enemies which she cannot counter while supporting.

Lady of Violets
Wife of Pent, Count Reglay of Etruria. Said to have caught the eye of many an admirer with her dazzling beauty and impeccable aim. Appears in Fire Emblem: The Blazing Blade.

Eternal Devotion
Bride of Pent, Count Reglay of Etruria. Dressed up for the festival together with her husband. Appears in Fire Emblem: The Blazing Blade.

Louise: Forgive me, my love...
Pent: Louise! This is too dangerous. Let's return home.
Louise: But everyone...
Pent: You are my most important responsibility. Here, lean on my shoulder.


Eliwood: How is Lady Louise?
Lyn: Lord Pent is escorting her home to Etruria.
Hector: I see...
Lyn: Her life is not in danger. She said she'll be fine and that we shouldn't worry. Lady Louise is more concerned for our safety than her own.
Eliwood: Lady Louise...

“No matter what happens, I'll be at Lord Pent's side.”
—Final chapter quote

Louise is illustrated in the trading card game with the following cards: 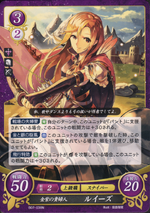 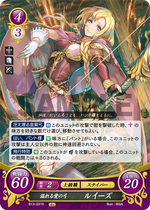 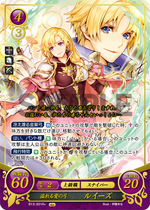 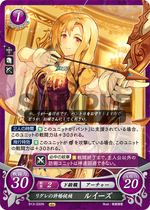