Cavalier
[view]
“You know the saying: If the stomach is empty, empty too lies the heart.”
— Lowen to Eliwood

Lowen is a playable character for Fire Emblem: The Blazing Blade. He is a fresh recruit of the Pheraean army, whom Marcus chooses to train personally.

Lowen was born to peasants in a poor village on the outskirts of Pherae. Although the village was far from the castle and had little worth saving, the knights protected the villagers from bandits. Inspired by their valor, Lowen aspired to become a knight himself, and traveled to the castle to begin his training as a squire. His father also became the chef for Eliwood's grandfather, the previous marquess of Pherae, until he threw out his back, and cooked for Eliwood's father Elbert later on, with Lowen getting his unusual tenacity in regards to food from working with him.

Even though Lowen was a soldier, he followed in his father's footsteps and made sure that Eliwood was fed well up until he was chosen to go with Marcus on a journey to find Eliwood's father. While moving ahead to recruit able-bodied men in a nearby village to aid in Eliwood's expedition, he encountered pillaging bandits and subsequently rescued the archer Rebecca as well as Mark to enlist their help in protecting the villagers. Once the village was saved, Lowen continued his service to Eliwood by fighting for him under Marcus's command. After the war’s end, he then returned to Pherae to become decorated for his accomplishments and continue his knightly career.

Lowen is a very gentle but insecure person, who constantly berates himself despite possessing a lot of talent in both sword fighting and cooking. Nonetheless, he is incredibly determined as well, and does not let his shortcomings get the better of him, which is most evident when he spars with Marcus.

With such an obsession with staying full coming from him birthed and raised on poverty, it leads to him passing out if he misses even one meal, causing him to carry emergency rations in his pack onto the battlefield, crammed with large quantities of food, all while concerned about the nutrition of others, panicking when he heard Eliwood was unable to eat breakfast. However, since he excels at cooking, he handles Eliwood’s meals and preparation during the journey and also serves as the army's cook.

Description: A knight in service to House Pherae. A fresh recruit.

Unlike most cavaliers, Lowen focuses on defense over offense. On average, Lowen will have remarkably high HP and Luck, and decent Defense making him a solidly defensive unit that is comparable to Hector or Oswin.

Inversely, his growths in all other areas are mediocre, resembling that of a pre-promote without the higher bases. Luckily, he has an early join time, so he can only keep improving and further decrease that possibility of being totally ineffective. However, Lowen has a wealth of excellent support options, and can either increase his decent Defense by supporting with Marcus and Eliwood, or improve his lackluster offensive game by supporting Rebecca or Eliwood for offensive affinity bonuses; the best aspect of supporting Lowen with Rebecca is that units that support each other get their partners support affinity bonuses and that of their own. Since Lowen has a fire affinity (The same affinity Rebecca carries), his damage output and critical bonus will rapidly rise making him more viable. It is recommended that you supplement Lowen with either an Energy Ring, Secret Book, or a Speedwing depending on which stats ended up alright and which ones ended up salvageable. It is not recommended to use him if he ends up with a vital stat like Strength or Speed being pitifully low as Kent and Sain possess far superior Strength, Skill, and Speed, but inversely, have lower HP, Luck, Defense, and Resistance.

Finally, Lowen has the best Constitution as both a Cavalier and a Paladin, and loses no Speed from equipping heavier weapons such as Steel Swords or Silver Lances unpromoted, and Hand Axes or Brave Swords after promotion.

In all, Lowen will mainly get used when skipping Lyn mode, since Sain and Kent will generally perform better than him, but can be hard to level up whithout Lyn mode.

“Knights should fight, not speak! ...Was that right?”
—Lowen's quote in Final Chapter: Light

Lowen replaced Marcus as the most famed knight in all Pherae. His endless zeal served Pherae well throughout his life.

Rebecca and Lowen were wed, and they became two of Eliwood's most trusted retainers. Their green-haired son inherited his father's chivalrous spirit, as well as his mother's smile and skill with a bow.

Lowen is illustrated in the trading card game Fire Emblem Cipher with the following cards: 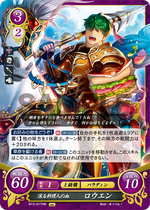 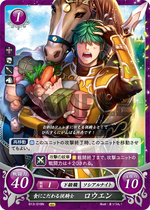 Lowen as a Paladin with an Axe