Commander of the Crimean Royal Guards

Swordmaster
[view]
“People of Crimea... Behold a true queen! YOUR queen! Long live Queen Elincia!”
—Lucia, before she was to be hanged in Radiant Dawn.

Lucia is a playable character from Fire Emblem: Path of Radiance and Fire Emblem: Radiant Dawn. She is a young lady descending from the house of Count Delbray, the older sister of Geoffrey, and the milk sister of Elincia. She commands the Royal Guards with Geoffrey and spearheads a clandestine network of spies to monitor the internal affairs of Crimea.

Lucia and Geoffrey were born into the house of Count Delbray of Crimea. While details of her early years remain unknown, it is known that they were raised with the recently-born princess of Crimea, Elincia, at the royal family’s villa. As the three shared their childhood, they grew very close. Once Lucia grew older, she became a soldier in service to Crimea.

When Crimea is defeated during Daein's invasion, Lucia continues to lurk in the shadows of her homeland alongside Geoffrey, Bastian and some other Crimean retainers. She first appears in Chapter 23, in which she arrives alongside a group of retainers as reinforcements for the Crimean Liberation Army.

After reuniting with Elincia, Lucia and Bastian proceed to lead Ike's army to Delbray Castle to celebrate her return to Crimea. However, when she learns that the castle is under siege from Daein forces, she advises Elincia to abandon Geoffrey and flee to safer grounds. Ike responds by denouncing her plans and choosing to fulfill Elincia's wishes by rushing to Geoffrey's aid.

Despite being shocked by Ike's actions, this incident serves as an eye-opener for Lucia and she learns about the importance of staying alive for Elincia's sake. Taking this in mind, she proceeds to assist Ike's forces in Chapter 24, fighting to save her brother from his untimely end.

Lucia remains with Ike's forces until the game reaches its conclusion, whereupon she serves the newly-crowned Queen Elincia as her loyal adviser.

Lucia continues to support Elincia as her adviser. Her close bond with the queen grants her a seat on the royal council, although the nobles prevent her from offering input. When news of a possible revolution reach Elincia’s ears, Lucia offers to go and investigate the reported ringleader of the rebellion. She infiltrates Duke Ludveck’s castle to unearth evidence of his plot to overthrow Elincia and her pacifistic rule over Crimea. During her stay at the duke’s castle, she is treated well by him, althought it was likely because the duke desires her. One night, Lucia sneaks out of the castle, hoping to discover some piece of evidence of treason. In a nearby cave, she discovers a document with Ludveck’s name and seal which was more than enough evidence to prove him a rebel. However, when she tries to leave the cave, she is attacked by the duke's men.

Once she arrives in Melior, Lucia watches as Geoffrey departs for Felirae to put an end to Ludveck's rebellion. She waits for news of the battle to relay to Elincia, who flees Melior for her safety. The sighting of a lit beacon alerts Lucia about the end of the fighting in Felirae, although she guesses the battle was a diversion. At nightfall, she leaves Crimea Castle to deliver a message to one of her many spies so that Elincia could be alerted to the coming danger. To her shock, she finds her agent dead and Ludveck himself waiting for her inside of a house. The rebels proceed to cut off a lock of her hair and use it as a means to blackmail Elincia into surrendering her throne to Ludveck.

When Elincia refuses to abide by their demands, the rebels place Lucia on the gallows in front of Fort Alpea, intending to execute her under the watchful eye of the Crimean public. However, this plan is foiled because the Greil Mercenaries interrupt the proceedings and rescue Lucia.

Later in the game, Lucia marches with Elincia and the rest of their army to enforce Crimea’s neutral stance in the ongoing war between the Laguz Alliance and the Begnion Empire. When Elincia pledges her support to aid Empress Sanaki of Begnion in reclaiming her empire, Lucia joins the troops who march from one battle to another across the border with Daein and eventually into Begnion itself. She aids Elincia and King Tibarn of Phoenicis as they clash with the army of Senator Valtome and track down Izuka in the swamps of Begnion.

Lucia will reappear in Part 4 of the game, and may be brought into the Tower of Guidance to reverse Ashera's judgment upon the continent of Tellius.

After the defeat of Ashera, Lucia returns to Crimea and remains at Elincia’s side. The love between the two of them is said to grow stronger than that of most blood sisters. Although Bastian attempts to woo her, Lucia never marries, which makes her the first of the queen’s retainers to do so. However, she will continue to have an affair with Bastian if they share an A support level.

Lucia is a wise and rational individual who treats almost everyone she meets with the utmost respect. She holds absolute loyalty to Elincia and is more than willing to undertake any tasks on her behalf, regardless of how difficult or unreasonable they may seem.

Lucia is often the subject of long rambling love declarations from Bastian, who appears to be smitten with her. She usually responds with a nonchalant attitude and quietly rejects his advances.

Lucia joins late into the game with generally worse stats than both Stefan at base as well as a promoted Mia or Zihark. She will struggle to ORKO enemies on Hard Mode and has very poor bulk. In general she should be outclassed by most of the units already in your party by that point in the game, however her stat growths are decent and she is not terrible if a swordmaster is needed for whatever reason.

If you decide to use Lucia despite her flaws, there are a few ways to mitigate her weaknesses. To improve her offense, removing Parity will enable her to use offensive skills and skill combinations, such as Vantage + Wrath or Resolve, both of which are combinations that exploit her meager durability to improve her damage output. Her high weapon rank will allow her to utilize effective weaponry against more bulky foes such as Generals and Laguz. Notably she has a very high magic stat for a sword user, making her a good candidate to hold a Sonic Sword if you have one.

While there are several other choices for Trueblades that have more availability, and thus more room for growth, Lucia is still by no means a bad character to invest effort into. She will cap her HP, skill, speed, and resistance rather quickly, making her well suited to take on the high amount of magic that gets shot around in the endgame. She usually gets very high magic, generally over 15, making the Imbue skill ideal to increase her longevity. This also helps patch up her subtle physical defense, which can be a bit of a liability if Lucia gets hit. However, Lucia's biggest flaw is not defense, but strength: by the time she is re-usable in Part 4, she will have difficulties one-rounding durable opponents, though a high critical rate rate will help compensate for this, as well as the ability Astra once she promotes to a Trueblade. Pairing her up with offensive support affinities, such as Brom, Calill, and Reyson (should they be well-leveled) is also very helpful to boost her lackluster power.

Using the Blossom skill on Lucia in Part 4-5: Unforgivable Sin is an ideal way to prepare Lucia for Part 4 Endgame and max her stats with the many Laguz available to train her on.

“I will not die... I must not cause the lady Elincia any more grief... I must not! Live... No matter the pain... I will live!”
—Lucia's death quote in Path of Radiance.

"Thank you, General Ike. Because of you, I believe we better understand how best to serve Princess Elincia."

Where the queen went, Lucia followed. Their love was fabled to be stronger than even most blood sisters.

First among the ministers to support her queen, Lucia never married. However, her affair with Count Bastian continues.

Lucia is illustrated in the trading card game Fire Emblem Cipher with the following cards: 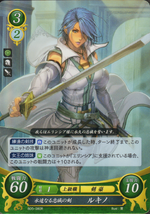 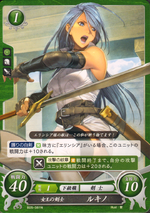 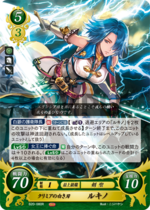 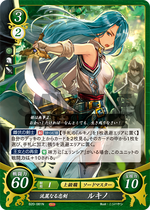 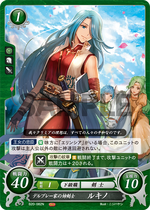 'Lucia' is the feminine form of the name Lucius in Italian, German, and English. Her name is pronounced 'Lu-CHEE-ah' in Italian, corresponding to her Japanese name 'Luchino'. Despite this, however, Mist calls her Lu-SEE-ah in the cutscene at the end of part 2.

In Christian tradition, Saint Lucia was a martyr from Syracuse in the 4th Century, and had her eyes gouged out. Thereafter, she became the patron saint of the blind, gathering a strong following in medieval Europe.