Michael Sinterniklaas
[view]
“I have no where to go home to... If I did, it would be House Cornwell.”
—Lucius to Raven in a support conversation.

Lucius is a playable character in Fire Emblem: The Blazing Blade. He is a Monk who follows the religion of Saint Elimine, and is deeply devoted to his best friend Raven. Due to his feminine appearance, he is often mistaken for being female.

Lucius was born in Etruria. His father was a famous mercenary for hire, but whom was killed by a thief in front of Lucius when he was three. His mother eventually died of sickness soon afterwards. Lucius then took the dagger that served as his father's murder weapon as a keepsake. He was then taken into an orphanage, where he spent the rest of his childhood. Often teased for his feminine appearance, Lucius still remembers a teacher who was particularly cruel to him.

When he grew older, Lucius left the orphanage and began to travel as a monk. He eventually became a retainer to House Cornwell, where he met Raymond, the son of Marquess Cornwell. Lucius served him for more than ten years before Marquess Cornwell and his wife were assassinated for unknown reasons. Although not known why, Lucius set out to travel on his own shortly after this.

While on his travels, Lucius stops by an inn in Khathelet in Chapter 7, where he witnesses Nils being thrown out by the innkeeper on account of him and his sister being troublemakers. Concerned, Lucius follows them outside, where he encounters Lyn and her party. Learning that she intends to help Nils, he decides to lend her his aid. Lucius will then remain with Lyn's party until they succeed in reclaiming Castle Caelin. Following this, Lucius departs and continues his solitary travels.

A year later, it is revealed that Lucius has resumed traveling with Raven again. In Chapter 16E/17H, both Lucius and Raven are captured and imprisoned in Castle Caelin when it is taken over by Laus' soldiers. When Raven catches wind that Hector will be amongst the forces approaching the castle, he, against Lucius' protests, makes a deal with one of the prison guards to be allowed out of the jail cell on account of a desire to settle a score with House Ostia. Raven is eventually convinced to stay his hand by his younger sister Priscilla when he encounters her, electing to join her on her journey with Eliwood, Hector and Lyn's army. Thereafter, Raven gets Lucius to follow suit, and the pair will remain with the army until its struggle against Nergal and his morphs concludes.

Following this journey, Lucius will open an orphanage on the Araphen border, living a simple life caring for helpless children. In The Binding Blade, Chad, Lugh and Raigh reveal that they had grown up in an orphanage in Araphen. During the invasion, the one they call 'Father' attempted to protect the garden from the intruding Bern soldiers but is tragically slain. While there is no official evidence that suggests Lucius is this ill-fated 'Father', the inference can be made nevertheless.

Depending on his supports, Lucius may choose to continue following Raven, where the pair work alongside each other as mercenaries.

Lucius is a kind and gentle soul, and is very expressive of the faith of Saint Elimine. Anger is an emotion that Lucius never expresses, even when he faces aggressive and violent people such as Karel.

Lucius is known to suffer from the effects of past traumatic experiences, a suffering that he term "a spiritual illness" in his own words. Instead of allowing it to torment him, Lucius chooses to transform this negative energy into something positive, making an effort to help others he deems to be suffering, sometimes even at the expense of his own health. Raven is one of these people whom Lucius tries to aid, as the man is blinded by a seemingly unquenchable desire to exact revenge on Ostia for the destruction of House Cornwell.

Lucius' tenderness is of such a huge magnitude that it takes on a distinct quality of magnanimity. In this regard, it extends to those who have caused him grief. This is portrayed through his supports with Renault, where he is quick to forgive the bishop for the murder of his father, and even goes on to empathise with his regret.

Lucius has also been portrayed as fiercely loyal to the people whom he deeply cares for. This is depicted through his obstinate refusal to withdraw and leave the battlefield even when he is urged to do so by Raven.

While Lucius joins Lyn's party during her story, he leaves and cannot be recruited until Chapter 16E/17H. If Raven's sister Priscilla talks to her brother and recruits him, he can also recruit Lucius in turn. Note that while Lyn can initiate a conversation between her and Lucius, Lucius will not join her, meaning that it is imperative that Priscilla is selected for this map.

Overall, Lucius can best be described as a glass cannon. He has very high Magic, Skill, Speed, and Resistance stats, strengths that are offset by his lacklustre HP, Defense, and Luck. This makes him one of the most fragile units when pitted against physical foes. The opposite goes for magic-wielding enemies, where he is one of the best magical tanks in the game. Therefore, he can be a valuable asset in killing enemy dark magic users as one of few characters capable of using light magic. As long as he is kept protected, his destructive power for dealing with any low-resistance enemies is almost peerless.

Lucius possesses some advantage over other magic units in that he has a C rank in staves the moment he promotes, opening up options such as power-leveling him through abusing the Barrier staff's given experience on use, and bringing him just short of using the ever useful Physic staff. His high magic and skill make him one of the best characters for using offensive staves like Berserk. Lucius is also one of the few characters who has the potential to use Aureola, the others being Athos, Serra and Renault. However, since Serra and Renault suffer from poorer Magic growth rates and Athos has the capability of wielding Forblaze, Lucius is thus the best candidate for using Aureola. Unfortunately, his lower Constitution will weigh him down, meaning it is not a good idea to use Aureola without using a Body Ring, although he will take less of a Speed penalty than Serra.

The Light
A gentle cleric who serves Raven. Carries a heavy burden from a dark childhood. Appears in Fire Emblem: The Blazing Blade.

“Our house...was invaded by a thief. My father was a famous mercenary, but the man was too strong. I saw my father fall before me. I recall it sometimes, even now... The eyes of the thief who killed him. ...Like terrible dark stones set in his hate-filled face...... All he left behind was this dagger protruding from my father's chest.”
—Lucius recounting his past.
“You...must understand. I am...a man. As a child, I was often teased for my appearance, and I have never once profited from it. Perhaps you meant to imply...otherwise?”
—Lucius on his appearance.
“You're like... You're my last family. Priscilla is... I should not think of that, should I... I was scared to lose the last of my family.”
—Raven to Lucius.
“Blessed Saint Elimine, please grant us a miracle…”
—Final Chapter: Light quote

Lucius is illustrated in the trading card game Fire Emblem Cipher with the following cards: 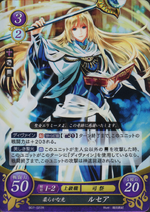 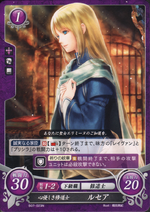 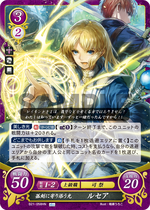 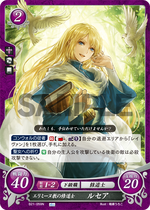 "Ruthea" likely derives from the Biblical name Ruth, from a Hebrew word meaning "friend". "Lucius" was likely chosen in localization to give him a more clearly masculine name.