Duke of Aegir
Prime Minister of the Adrestian Empire

Chapter 11: Throne of Knowledge (If the Black Eagles are chosen) (Three Houses)

Doug Stone
[view]
Ludwig, also known as Duke Aegir, is a supporting antagonist from Fire Emblem: Three Houses and Fire Emblem Warriors: Three Hopes. He is the Prime Minister of the Adrestian Empire and the father of Ferdinand.

Ludwig is the latest in a long line of Dukes of Aegir to inherit the position of Prime Minister of the Adrestian Empire. In Imperial Year 1171, he masterminded the Insurrection of the Seven, a soft coup that stripped Emperor Ionius IX of much of his power and reduced him to a figurehead. Since then, Ludwig has effectively ruled the Empire from behind the throne and worked closely with Those Who Slither in the Dark, performing experiments on the Emperor's children.

When Edelgard is made Emperor, one of her first decrees is to strip him of his titles. Ludwig tries to argue before backing down. He is then placed under house arrest.

In Ferdinand and Lysithea's Paralogue, Ludwig escapes from house arrest and winds up in Hrym territory. Confronted by people who have experienced atrocities by Aegir's rule, along with Lord Arundel's actions in Aegir's name, Ludwig is killed.

Noticeably corrupt, Ludwig's attitude is the exact opposite of his son, and likely the main reason why Ferdinand tries to act as a proper noble. Despite this, Ferdinand appreciates the hard work he did as Prime Minister and deeply cares about him, shown by his concern when Ludwig went missing and his sorrow at the news of Ludwig's murder.

Ludwig is an Old High German given name. Etymologically, the name can be traced back to the Germanic name Hludwig, composed of Hlud or Hluth meaning "famous", and Wig meaning "war". 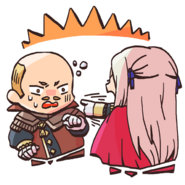