N/A
[view]
“You think I did not try, Princess? Our king is meek; in the end, Dolhr proved better at cowing him than I did.”
—Lorenz describing Ludwik's allegiacnce to Dolhr in Shadow Dragon.

Ludwik (ルイ, Rui lit. Louis in the Japanese version) is a background character from the Archanea Series of Fire Emblem. He is the king of Grust and the father of Yuliya and Jubelo.

Ludwik is described as a cowardly and weak-minded man in contrast to the powerful nation he ruled. As a result of this, as well as a fear of Medeus and strong anti Archanean sentiment among the Grustian populace, Ludwik chooses to join with Dolhr in the War of Shadows.

Not long after this, Ludwik's children, Jubelo and Yuliya were captured by Gharnef who used their lives to blackmail Ludwik and ensure he'd never betray Dolhr. By the tail end of the war, Ludwik had fallen ill and served as little more then a figurehead of Grust.

He is never seen in the games and dies sometime after the events of Shadow Dragon, presumably due to his illness. 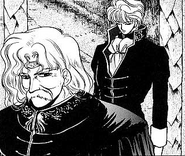