Michael Johnston
[view]
“If... If I don't make it through this war, promise me you'll pick up the little ones at the Elimine Church.”
—Lugh in a support conversation with Raigh.

Lugh is a playable character in Fire Emblem: The Binding Blade. He is the son of Nino and older twin brother of Raigh. He considers Chad to be family as well.

He makes a brief cameo in Chapters 3, 17, and 18 of the Fire Emblem: Hasha no Tsurugi manga.

Hailing from an orphanage of Araphen, Lugh grew up with Raigh and Chad after his mother had disappeared when he was just four years old, inheriting his magical talent from her. After witnessing Bern reduce his home to ashes, Lugh temporarily stayed in the Elimine Church, but then reunited with Chad on the battlefield and decided to join Roy's party to punish those who took part in the orphanage's destruction.

After the war, he established a Magic School for other children with no family.

Having a personality the polar opposite of Raigh's and more like his mother, Lugh tends to be positive, polite, kind, and conscious of others, as many of his support conversations have him bringing baked goods.

While aware of being able to use magic, he does not know just how helpful it can be. Before, he simply thought it could only hurt people, and did not want to use it. He decided to go out onto the battlefield with Chad, but stayed silent and concealed as he did not want to burden others with protecting him.

While he has this strong aspect at his core, he can be bitter, as shown in his support conversations with Melady, as he reveals that he's deliberately staying angry at Bern so he can fight.

Description: A young mage. Grew up in an orphanage destroyed by Bern.

As the game's first offensive magic unit, Lugh fills a fairly unique niche in the early game of Binding Blade. He has access to the Fire spell in the earlygame, which has a marvelous 95% accuracy, allowing Lugh to chip enemies down at range. He is held back, however, by his base stats, as well as Fire's relatively low base Might. This means he does not tend to deal more than 7-8 damage a hit in the early game, which is not inconsiderable given the lack of risk involved, but not nearly enough to kill or cripple a healthy enemy. Lugh does stand out, though, due to the fact that his magic hits on Resistance, meaning he deals this damage even to durable enemies like Knights (which he can also double) or Wyvern Riders. Given the reliability of his attacks, it should not be too difficult for Lugh to contribute and gain levels. Lugh is quite frail, and though he does not tend to be at risk of dying in a single shot, the player should keep him out of trouble.

As the game goes on, Lugh will obtain stronger tomes, such as Thunder and Elfire, which retain workable accuracy and boast higher Might; combine that with his serviceable 40% Magic growth, and he will be able to hit most enemies reasonably hard. His main offensive issue is that, while his 50% Speed growth is decent, his base Speed of 6 is underwhelming at best. By the Western Isles, he should be able to double very slow enemies like Steel Axe Pirates and Brigands, which will likely kill or at least seriously reduce them, but unless he has gotten lucky or been trained extensively, he should still more or less stick to chipping enemies down. Thankfully, his good Skill combined with his tome accuracy means that his status as a reliable user of chip damage remains relevant, particularly as enemies become increasingly strong.

Lugh's promotion to Sage helps him significantly: the +4 Magic vastly improves his damage output, the +1 Speed likely pushes him into doubling another category of enemy, his defenses get a noticeable bump, and he gains the ability to use staves. Though he is restricted to E-rank and unlikely to go much further, his Magic is likely to be high enough at this stage to make him a good healer even with basic Heal. Unfortunately, the Guiding Ring is a highly contested item, and Saul and Clarine gain a great deal from it in the form of similarly large stat boosts, staff rank increases, and offensive magic use. With that in mind, it's very possible that Lugh will have to wait until Chapter 14 to receive a promotion, or even Chapter 16. Regardless of when you choose to promote him, Lugh tends to end up rather powerful by the lategame. Enemy Resistances remain low, with Manaketes being notably weak to Lugh's attacks, his Speed growth should allow him to double the majority of foes, and he has gained access to the strongest tomes, such as Bolting, Aircalibur, and the legendary Forblaze. The former gives him a spectacular attack range (helped by its surprisingly low weight), and the latter two boast anti-Wyvern effectiveness, helping greatly in Wyvern-heavy chapters like Chapter 21.

In general, while Lugh is held back by his poor stats, his class gives him a number of interesting niche that makes him worthwhile. He is by far the best of the game's Anima specialists (with Lilina and Hugh carrying more serious flaws), and as long as he remains on his averages, he should blossom into a strong unit.

Lugh - Child of Anima (理の申し子 Kotowari no Mōshigo)
"Lugh built a small magic school where the orphanage used to be. He took in orphans and other deprived children and taught them magic as a way to live. Many powerful magicians who left their name in history can have their roots traced back to that school."

Lugh is illustrated in the trading card game Fire Emblem Cipher with the following cards: 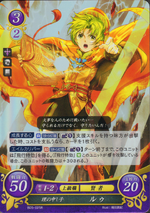 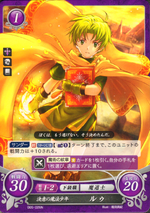 Lugh's name is most probably taken from that of the Irish deity of the same name. This deity is represented as a mythological hero, who was, incidentally, the son of Cian and Ethniu. He apparently led the Tuatha Dé Danann to victory in the second battle of Magh Tuireadh and is revered as the High King of Ireland of the distant past. His Welsh counterpart is Lleu Llaw Gyffes.