Greg Chun
[view]
“No matter how quiet a village you hail from, in the hands of a capable teacher, one can become every bit as strong as a royal knight. I find that thought quite inspiring.”
—Lukas in Shadows of Valentia

Lukas is a playable character from Fire Emblem Gaiden and its remake, Fire Emblem Echoes: Shadows of Valentia.

A loyal member of the Deliverance, Lukas grew up on the borderlands of Zofia. His older paternal half-brother saw him as a rival, despite being younger, and forced Lukas to enlist in the Deliverance. He eventually becomes a Soldier whose considerable merits have caused him to rise quickly up the ranks. He came to Ram Village to recruit Mycen when Desaix took over Zofia castle. However, Mycen refused his request. Alm then decides to join in place of Mycen. For the majority of the game, he acts as an older brother figure and mentor to Alm.

After Clair is rescued in Chapter 1, Fernand starts browbeating Lukas, who's obviously very uncomfortable while also trying to keep it together, as he is the oldest member of the group and feels the need to act accordingly.  Alm cuts in and tells Fernand that he'll take any insults to himself, but he won't stand for any denigration of Lukas, to which he genuinely expresses his gratitude.

After the war, he joined the knighthood of the newly united Kingdom of Valentia and worked towards its restoration, and post-retirement became a public teacher.

While he can come off as strict in his professionalism, Lukas is sweet-natured and polite to everyone he meets, and although subtle, has a dry sense of humor. He has a very well-maintained calm, reliable, and professional front, however, in the rare events that he loses his temper, Lukas's feelings slip past his said front, such an example being when a duke called him a backwater buffoon, causing him to lose his temper and beat him in a duel.

He often fears coming across as cold and detached in his composure, the fears of which hold heavy weight on his thoughts, as he bears guilt about his inability to genuinely put his heart into his own performance as a soldier, and it feels strange and weird to him as a consequence. This ends up being his biggest strength, as he is able to stay calm at the direst situations, even when learning disastrous news.

While Lukas has the behavior of a noble, he isn't incapable of recurring to underhanded tactics, such as taking Rigelian civilians as hostages and threatening to execute them if safe passage is not granted for the Deliverance, causing even someone like Slayde to be surprised at the use of such a method.

In Chapter 1, talk to him again in Ram Village after Mycen refuses to join (needed to progress).

Lukas joins early during Act 1 and makes a good impression. He'll deal a lot of damage and barely take any in return. He can take advantage of his class line's high strength without dealing with the low movement or speed due to the quick ring (+5 move and speed fixed to 40). In addition to, Silque can also warp him anywhere on the map since Warp has infinite range in this game.

* DLC class; access with the Altar of the Titan.

Lukas is a soldier that joins Alm's party in the introduction in Ram Village. He is the second strongest fighter on Alm's starting team, only being surpassed by Alm himself. Statistically he has a very high strength and defense growths as a result his combined class and personal growths, but his already low personal speed growth is lessened even further by the negative speed growth of the soldier classline. While his promotions to knight and baron guarantee him to be one of the most durable and hard hitting of Alm's entire party, his lack of a speed gain from any of his promotions and his low speed growth give him issues double attacking enemies throughout the game, and his low resistance in particular leaves his susceptible to magical enemies. As he is a soldier, he is also stuck with his mediocre 4 move movement for the whole game, and may not be able to keep up with his allies unless he is constantly warped over to them by Silque, or later Tatiana.

Overall, Lukas is a powerful and durable member of Alm's army, especially early on, however his low speed, movement, and resistance become glaring weaknesses that become more notable as the game goes on and more party members are recruited that do not suffer from the restraints he does. The loss of infinite warp range and the nerfing of the quick ring hurt his viability greatly in the transition from Gaiden to Echoes.

If you wish to reclass him using a Pitchfork, his growths are most suited to those of a mercenary; Lukas makes an excellent choice for a Dread Fighter because of this if you're in need of another.

Lukas is an Infantry Lance unit with comparable bulk to most Armor units and a decent Atk at 35 neutral. As such, he has many advantages as a physical tank that does not require movement skills nor does he have to fear Armor slaying weapons. Unfortunately, he is sorely lacking in Spd and Res, which most armors can patch up with their skills, leaving him vulnerable especially to mages and fast, hard hitting greens. Nonetheless, using him as physical tank can still yield promising results when facing a hoard of the ever increasing Sword unit pool.

He initially started off with a Killer Lance, but later obtained a preferred weapon, the Daybreak Lance, a stronger version of the Killer Lance, giving him an accelerated cooldown to his Special. When refined, he gains a Sturdy Stance effect, increasing his Atk/Def by 4 when his opponent initiates combat on him. More power to his two strongest stats only serve to strengthen him as a wall.

With his lance Sacred Cowl becomes a one attack cooldown and can potentially shave damage from Tome, Staff, Bow, and Dagger units, but usually it barely affects the outcomes he would have already have against these weapons as he will still take moderate damage from the former two and further weaken the latter two that he already takes less damage from. Fortress Defense increases his Def by 5, but also reduces his Atk by 3. The trade off makes him even more bulky than before, but also dampens his damage output. If willing to focus more on making him a wall than a tank, this is one means to achieve that. Obstruct prevents foes from moving through spaces adjacent to him, forcing some to attack him before they can get to the more vulnerable allies behind him.

Because Lukas cannot patch up his Spd and Res through armor skills to mitigate them, Lukas is easily countered by any sort of strong Green and Blue mage, especially the common threats. Dragon Units, who can target his res, pose a huge threat to him as there is no means to him to effectively engage them in battle during either phase. Finally, many bulky green units shrug off his attacks, especially the likes of Hector and Sheena.

Killer Lance can be refined up to Slaying Lance+ and is his best weapon overall. Solidifying his defensive role means giving him the Def refine to further push his physical bulk. Reposition is his best support skill to help move allies around. His high Def and accelerated special cooldown makes him the perfect candidate for Bonfire. His Skill A can remain Fortress Defense, but taking Steady Breath if possible is the better option if willing to work with a premium. His speed is so low that Quick Riposte for his Skill B is the only real means for him to ever launch consistent double attacks. Finally, his high HP makes him a great candidate for Infantry Pulse. With these skills, Lukas becomes a powerful bruising physical wall.

Buffet for One
A young noble with the Deliverance. Spends his free time in quiet solitude when he can. Appears in Fire Emblem Echoes: Shadows of Valentia.

Despite the visual lack of equipment, Picnic Lukas is an armored Lance unit which immediately makes him a step above his base form. He retains his base form's stat distribution trend, having high Atk and Physical bulk, but pitiful Spd and Res. Unlike his base form, the former is easily solved by access to Armor skills that make it more of a moot point than an actual weakness like his base form. While he loses some movement in exchange for a higher Base Stat total, this is also resolved with Armor movement skills. The only real mark against him is that he is not particularly outstanding when other Armor Lance units exist in the normal summoning pool. Still, obtaining him yields admiral results that perform as much as one should expect of an armor unit.

Luncheon Lance increases his Atk/Def by 4 when attacked by an enemy, essentially mirroring his base forms refined effect of the Daybreak Lance. It assists him more during the enemy turn by improving his two best stats and as such, helps him duel physical units. It can also be refined to give him a boost to mainly his Atk or Def as his Spd is too low to salvage while boost his Res only gives him a paltry boost.

Pivot provides excellent mobility for Armor units and is a welcome addition to him in order to increase his mobility. AR-O Attack Defense grants him bonus Atk/Def in battle during Aether Raids based on the number of active Defensive structures. This gives him further strength and bulk, but is only usable in Aether Raids and purposeful retaining of the opponent's defensive structures to get the maximum benefit. Wary Fighter resolves his low Spd by eliminating all follow-up attacks from himself and his opponent so long as his HP is at least 50%.

Statwise, Mages are his strongest counter as some can easily nuke him in a single hit or at least deal critical damage from them. Micaiah and her Brave form especially hit hard with their weapon's effective damage against armors. Staff users carrying Wrathful Staff/Dazzling Staff combo can poke him out in the event that he runs Distant Counter in his build. Otherwise, strong, bulky greens like Brave Ike and Hector can easily take a hit or two from him and retaliate with color advantage. Lastly, Dragon units especially green ones like Fae, Nagi, and Adrift Corrin target his lower Res and use their color advantage and bulk to dispatch him.

Some may choose to take a Slaying Lance as the special cooldown acceleration is far more useful than the stat boost of the Luncheon Lance. Bonfire helps with this by becoming a two turn special that adds 50% of his Def as true damage to his attacks.

Options for his Skill A include Distant Counter to broaden the range of enemies he can counter attack or Death Blow to increase his player turn offense. Depending on what type of build the player wishes to make of him, Bold Fighter increases his offensive turn damage output while Vengeful Fighter increases his defensive turn damage. Finally Skill C can be filled with a host of Armor skills including the stat boosting ones for budget users while those who can gain luxury skills can use Armor March.

Lukas joined the One Kingdom's Brotherhood of Knights, and after retiring, founded a school where he devoted himself to his students' education. His calm, intellectual mind won him many friends, and he never longed for companionship throughout the rest of his days.

Lukas is illustrated in the trading card game Fire Emblem Cipher with the following cards: 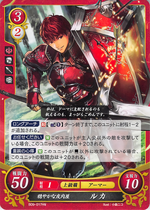 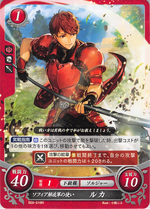