Prologue I: Meeting (New Mystery of the Emblem)

Edward Bosco
[view]
“Urgh, it hurts... I'm done for!”
—Death Quote in Mystery of the Emblem

Luke is a playable character in Fire Emblem: Mystery of the Emblem and Fire Emblem: New Mystery of the Emblem. He is a fresh recruit of the Altean knights, a member of the 7th platoon alongside Roderick, Katarina and Kris. He was originally a gambler and views Roderick as his rival. Depending on Kris's appearance, Luke will come up with a title for him/her. After the War of Heroes, Luke retires as a knight and continues living jobless.

According to the Takayashiki Hideo's Mystery of the Emblem novel adaptation, Luke is 18 years old. [1]

Luke's family has served the Altean kingdom as knights for generations. He was forced to step up and enlist when his older brother became bedridden and couldn't receive the title. This has given him a bit of an inferiority complex, as he doesn't want to be seen just as a replacement for his brother.

During his training, he strikes friendships with the other members of the 7th Platoon, which his friend Roderick is also a part of. He comes across as rather cocky sometimes, owing to his desire to prove himself. He also exhibits some skirt-chasing tendencies, wishing that more girls would join their platoon, and expressing disappointment when one of them is Cecil, whom he considers a violent girl.

When asked by Roderick as to why he became a knight, he claims that he did so "because knights get all the ladies", playing it up as his real reason to become a knight. After the war, he retires from knighthood and continues his playboy ways, living widely and freely.

Luke is one of the most consistent units in the game, and will rarely turn out bad. Compared to Roderick and Cecil, the other two starting cavaliers, he will have an easier time taking hits and dealing damage, but will find it harder to double throughout the game. While he may not get as much Speed or Skill as the other two cavaliers, he makes up for it by high HP, Strength and Defense stats.

If reclassing is considered,Luke should be reclassed after Hard Mode has been beaten as this unlocks his true potential by gaining access to the Mercenary and Fighter/Pirate Class sets.

Mercenary->Hero:As a Mercenary Luke will be on par or even better than Ogma because he has the third best availability in the entire game (joining in Prologue 3;10 chapters before Ogma),high bases,good growths and a D Rank in Swords.His growths will focus on HP,Strength and Speed with good Skill and decent Defense,only lacking in Luck and Resistance.This makes him an amazing physical unit that can not only deal a lot of Damage even with weaker Swords but also take and or dodge many hits.His only real weakness aside from Resistance is his E Rank in Axes when being promoted into a Hero as he is locked to Iron Axes without enough training but he should have enough time to train if he promotes before dragons become prominent enemies.

Fighter/Pirate->Warrior/Berserker:With more than 100% HP Growth and a base of 24 and 6 HP as promotion gain,Fighter Luke will max his HP as late as Level 20/10 as a Warrior and as early as Level 19 as a Fighter.This coupled with his enormous Strength and (for an Axe-User) impressive Skill make him an amazing offensive Unit but also a glass cannon with a base Defense of 3 and a growth of 30% and Resistance of 1 as a warrior if the player doesn't give him a talisman or two.But he still is an overall great unit that covers both melee and ranged combat with ease.

As a Pirate Luke will be much more focused on dodging attacks to stay alive as he will have less HP and more trouble hitting units because of his lowered Skill but an major boost in his speed.But his overall lower growths are compensated for when he promotes into a Berserker and gains not only 15% innate critical rate but also a boost in weapon rank and therefore a boost in hit rate as he uses axes,which replaces the need for Skill Luke has as a Pirate.

Fighter and Mercenary->Hero:An alternative to the above mentioned routes is Luke alternating between Fighter and Mercenary before promoting.This means that Luke,if he had an equal amount of fights in both classes,would gain ~9 Levels in each class and should have his weapon rank at least at C for swords and D for Axes.That means that he has instant access to Hand Axes as a Hero and an easy to gain way of attacking ranged while also having steel axes for more damage output.This reclassing route is the most balanced out of the 3 with a good balance in Stats and Weapon Rank.

Overall, Luke is a great unit that can be relied on.

Untamed Knight
"Luke suddenly retired from knighthood and continued his playboy ways. He lived the rest of his life widely and freely."

Luke: Sorry, Kris, but I wont hold back just because you're a girl!
Kris: That's fine with me.
Luke: I'll show you what I've got! Kris, try not to fall in love with me!
- Luke's battle quote against Kris in Prologue II of New Mystery of the Emblem.

“Kiddo, just stand back and watch! Only Kris is worthy of fighting me!”
—Luke's battle quote against Ryan in Prologue II from New Mystery of the Emblem.

Luke is illustrated in the trading card game with the following cards: 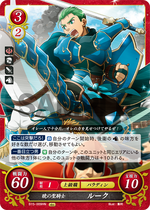 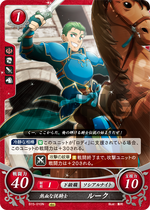