Brina Palencia
[view]
“Because there's no one better than me.”
—Lute in a support conversation with Knoll

Lute is a playable character in Fire Emblem: The Sacred Stones.

Lute is an extremely studious, if not eccentric, young mage. Lute believes she is a prodigy, and tells this to everyone she meets. Given her enormous wealth of knowledge and her alleged ability to remember practically everything she reads, hears, and sees, it is hard to argue with her. She's the opposite of her best friend, Artur, in that she spends most of her time inside studying as opposed to being outside. She has a motto: "There's no one better than me!", and also often claims "I am superior, after all."

Lute is boastful and has a habit of "monk watching" (spying on Artur). In one of her support conversations with Knoll, whom she also stalks in the beginning to the point of making him unnerved, she claims to have some supposed "knowledge" about him. She is like Canas, in Fire Emblem: The Blazing Blade, since he claims to be a scholar as well. For all her studies, she does have a great lack of knowledge of less academic matters such as love, a subject that flusters her greatly.

*6 in the Japanese version

Lute is a mage that joins the player's army in chapter 5. While her offensive growth rates are extremely impressive, her base stats are below average for her join time, and her low con of 3 causes her to be slowed down by all tomes prior to promotion, causing her effective speed to quite often be lower than her speed stat would imply. Despite this, she has the highest magic growth of all playable units, and a decent speed growth. Once she has grown out of her low starting state, she will become able to successfully double attack many enemies units, almost always one rounding them as a result of her high attack. Care must be taken with her placement, as her durability in regards to avoid and defense are mediocre, only becoming more acceptable once she has either promoted or built up support bonuses. Until then, she can avoid most attacks by attacking at range, working as an effective offensive unit.

Upon promotion, Lute has the option to promote to either Mage Knight or Sage, both of which give her access to Staves. Her Sage promotion gives her slightly higher defense and resistance gains, as well as access to Light Magic for weapon triangle control. Her Mage Knight promotion gives her 7 movement and canto, and a slightly higher bonus to magic, as well as giving her a much higher bonus to constitution, which will drastically improve her effective speed when using any tome other than a Fire tome. In the main campaign, where class stat caps are largely irrelevant, her Mage Knight promotion is largely superior, but players planning on playing in the Creature Campaign may prefer to promote her to Sage, as it has significantly higher stat caps, as well as access to light tomes, should they be desired.

Prodigy
A young mage of Renais with an unusual temperament. Confident in her abilities. Appears in Fire Emblem: The Sacred Stones.

Summer Prodigy
A young mage of Renais possessed of a rather unusual temperament. She is searching for signs of new magics among the summer sands. Appears in Fire Emblem: The Sacred Stones.

“You can't possibly consider fighting without my genius at your side!”
—Lute speaking to Eirika at the start of Chapter 7

“Oh, that's the Demon King, isn't it? Yes, I've read all about him.”
—Lute's Final Chapter Quote in The Sacred Stones

“You have nothing to worry about. There's no one better than me!”
—One of Lute's Quotes in a Support Conversation with Kyle

Lute, Prodigy (奇知なる魔道)
"After the War of the Stones, Lute returned to Renais to continue her arcane studies. She spent far less time locked in her library, preferring now to explore the outside world. She grew into a great and well-traveled sage."

A Support with Artur
"Artur and Lute were married upon their return. Artur handled the housework, but otherwise, their lives were unchanged. When they had a son, Lute's interests shifted from studying Artur to studying her son's baffling habits."

A Support with Kyle
"After the war, Kyle and Lute were married in Renais. Kyle's friends were disturbed by his choice of brides, but they could not deny his happiness. Before long, they had a son, and Kyle dedicated himself to his upbringing."

Lute is illustrated in the trading card game Fire Emblem Cipher with the following cards: 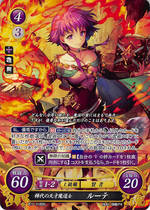 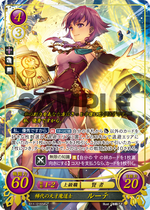 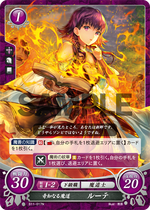 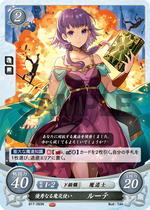 A lute is a stringed musical instrument popular in the Middle Ages. Also, 'lutte' in French means 'battle'.