Brian Beacock
[view]
“I know how precious my gifts are, so I intend to spend my life perfecting them. I understand my calling, even if Delthea does not.”
—Luthier.

Luthier is a Mage from Fire Emblem Gaiden and its remake, Fire Emblem Echoes: Shadows of Valentia.

Descendant from a Zofian proficient in magic, Luthier is a mage who lives in a village located at the Zofian borders. When his younger sister Delthea is brainwashed by the necromancer Tatarrah and forced to help him guard the floodgates between Zofia and Rigel, Luthier begs for Alm's help when he enters the Forest Village, and offers his services in return, joining Alm's army. After the war ends, he feels his magic is still too inexperienced and leaves for a continent beyond the sea.

Fully devoted to mastering the family's traditional art of sorcery, he takes his training very seriously to the point of his younger sister's lack of interest in magic greatly frustrating Luthier as no matter how hard he trains, he will never reach the heights Delthea is capable of reaching.

Such dedication causes Luthier to show narrow interest to the people of society, with Delthea often berating him for being so reclusive to the point which he admits that his only friend in his village was a cat. However, Luthier does manage to befriend Alm, his first real friend.

As a result, he's inept on how to interact with others or read social cues. For example, he outright asks Alm if they are friends, and his little sister makes fun of his single-minded conversation of magic to others.

He has a strained relationship with Delthea, finding it impossible to deal with his younger sister’s selfish streaks, but deep down truly cares for her and is only strict with her because he wants her to be loved.

In Chapter 3, talk to him at the Forest Village.

Luthier is an average Mage. When you get him, he has some pretty good offensive stats and comes with the Excalibur spell, which adds a 20% Critical rate. This allows him to be a pretty high end damage dealer when you first obtain him. He extends his usefulness by obtaining Thunder 3 levels later. However, Luthier will slowly fall behind your other units as none of his growths are particularly impressive other than Luck. Unfortunately, Luck is not that useful to begin with and his starting Luck is so low that it will take a long time before it becomes even average. His Speed will become a bigger problem as you progress through the game as his early offensive advantages become less relevant.

Luthier is an interesting unit. If you did not change Kliff or Tobin to a mage, Luthier will work greatly as your main Sage for the entirety of chapter 3 and the first half of chapter 4. However, he will start to drop off for the latter half of chapter 4. Due to his solid base attack he will do fine damage for a while but start to deal less and less meaningful damage as time goes on. However, due to most enemies having bad resistance for the majority of the game, Luthier will be at least good. However, he may fall behind in speed, so it would be a good idea to give him a Pegasus Cheese if you wish to use him. It is also worth noting his support with Delthea grants her a 10% increase to her hit rate at A rank, making Seraphim and Ragnarok both have 100% accuracy most of the time. However, compared to the other mages in Alm's route, he lacks the extremely impressive stats they have, especially Kliff's extremely high speed and spell set, and Tobin's balanced stats. If you wish to reclass him using a Pitchfork, his growths are most suited to those of an Archer; Luthier makes an excellent choice for a Bow Knight because of this if you're in need of another.

Odd Wayfarer
A mage and eccentric man of Zofia who excels in magic but has no friends. Appears in Fire Emblem Echoes: Shadows of Valentia.

Spring Hopes
His fervent study of magic may have cost him the chance to make friends, but it did bring him to this festival. Appears in Fire Emblem Echoes: Shadows of Valentia.

“I lent you my magic as best as I could...”
—Luthier's death Quote

"Feeling that his magic was still too inexperienced, he crossed over to a continent beyond the sea."

Painfully aware of the inadequacy of his magic, Luthier journeyed across the sea. What he did there is unclear, but stories tell of a steady stream of angry ruffians who later came to Valentia with a bone to pick with an eccentric mage...

Shadow Dragon and the Blade of Light manga

In the manga, Luthier appears in Khadein, watching the young mage, Merric as he finally mastered the Thunder spell. The two proceed to go out for a walk. Merric praises Luthier's powerful magic skills for his mastery over the spells Bolganone and Elfire. Luthier proceeds to admit that he really had no interest in either of the two spells, and actually sought out "the wind magic... Excalibur" as well as "The light magic... Aura" and reminded Merric, that he too, as a fellow mage, should attempt to learn these two uncommon spells. Luthier prepares to head back to his home in Rigel, but before doing so, tells Merric that the prince of Altea has come out of hiding in Talys to defeat the army of Dolhr, and further motivated Merric to go seek them out by telling him they may try to meet up with the princess of Archanea. The two then part ways, Luthier telling Merric they may never see each other again.

Luthier is illustrated in the trading card game Fire Emblem Cipher with the following cards: 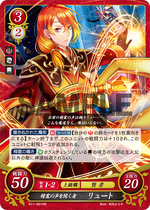 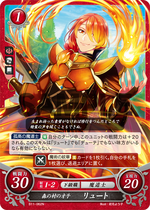 A luthier is someone who repairs or crafts Lutes and other string instruments (i.e violins). A luthier is also a French-bred racehorse.