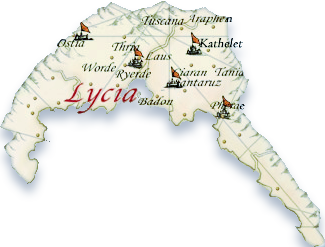 Lycia (リキア諸国 Rikia Shokoku, lit. Various Countries of Lycia) also known as the Lycian League (リキア同盟 Rikia Dōmei, lit. Lycia Alliance), is a nation in Fire Emblem: The Blazing Blade and Fire Emblem: The Binding Blade. It was founded by one of the Eight Legends: Roland the Champion, the wielder of Durandal, the Blazing Sword in the war with dragons known as the Scouring. Lycia is a federation of various territories, each ruled by a marquess.

Canonically, it is learned in the games that members of House Ostia are direct descendants of Roland, putting Ostia in a position of considerable power over the others. Other important territories like Caelin, Pherae, and Laus are also found here.

Noncanonically, in the Hasha no Tsurugi manga, Princess Tiena of Tania and Marquess Worde, Lord Ranward, are related as niece and uncle, similar to how Hector and Orun are related as half-brothers.

At one time, Lycia consisted of 14 noble houses, and each of which ruled over a certain area within Lycia, thus its title of the Lycian League. These noble houses are:

Sometime before the events of The Blazing Blade, House Cornwell was destroyed and its land divided up among other nearby Lycian territories due to suspected corruption within House Cornwell, although this was later shown to have been untrue.

Also, at the end of The Blazing Blade, Caelin was merged with Ostia on Lyn's suggestion. This was due to (depending on Lyn's ending) either Lyn marrying Hector or Eliwood and living with them in their territory, or Lyn returning to the Sacae plains in either her normal ending or her ending with Rath.

During the events of The Blazing Blade and The Binding Blade, Ostia is the ruling territory in Lycia. In addition, at the end of Fire Emblem: The Binding Blade if Roy marries Lilina, Lycia is united into a powerful kingdom, dubbed the Kingdom of Lycia.

Being centrally located, Lycia is found west of the Kingdom of Bern. Bandits from the mountains of western Bern rarely enter into Lycian territory. West of Lycia is the Kingdom of Etruria, the country of origin of characters like Pent and Louise. The southern part of Lycia finds itself along a long lateral region. Lycia is located to the far south of Ilia and to the immediate south of Sacae. Lycia is north of Valor, The Dread Isle. Within Lycia itself, Ostia is found to the northwest and Pherae, to southeast.

The Lycian league was the world's first federation, and is located in present day Turkey. There was a Greek myth that a Chimera, a fire breathing monster, lived there. Many European languages are related to Lycian.