Mark P. Whitten
[view]
“Mm... My research isn’t complete yet, but there’s no mistaking the power the Sacred Stones contain. And the Stone of Grado seems especially responsive to my dark magic. I suppose it’s because it contains both sacred and demonic properties. Regardless, if I can just press my studies a little harder... Well, I think I might be able to use it to heal my father’s illness. If that works, there’s no telling how many other people I can help as well.”
—Lyon in a flashback in The Sacred Stones

Lyon is the secondary antagonist in Fire Emblem: The Sacred Stones. He is the prince of Grado and the son of Vigarde, as well as a close friend to Eirika and Ephraim.

Lyon is a gentle person who greatly admires his close friends, Eirika and Ephraim, princess and prince of Renais respectively. His greatest ambition was to be a strong ruler to protect his empire but harbored feelings of uselessness fueled by his weak health, his one-sided feelings for Eirika, and his hidden jealousy of Ephraim.

Aided by Knoll, who was among a team of Dark magic researchers, he discovered and used a "forbidden" spell that allowed him to see into the future. What he saw was a massive earthquake that would destroy most of Grado. He began to experiment with the Fire Emblem, which was the Sacred Stone of Grado that contained the spirit of the Demon King, Fomortiis.

Lyon first appears in a cutscene in the chapter "A New Journey". Eirika and Ephraim share a flashback in which they talk with Lyon about their ambitions in life, etc. In Chapter 18, depending on the route taken, he is either completely possessed by the Demon King, who imitates his soft persona to convince Eirika to hand over the Renais Sacred Stone, or fakes possession (so as not to reveal the truth to his friends) and takes the Sacred Stone from Ephraim by force before revealing himself. He uses the demonic resurrection spell Naglfar in combat, as well as the demonic spell Fenrir and the leech spell Nosferatu in Chapter 17.

In the last chapter, he makes a last stand with a large group of monsters to ensure Fomortiis' ritual is not disrupted. Eventually, he is overwhelmed and dies in the arms of his friends. His death served as the final catalyst for Formortiis to return to his demonic body. Despite his efforts, the earthquake he foresaw happens anyway and is seen by people as the divine punishment for Grado.

Lyon is recruited by beating the Lagdou Ruins three times along with his signature tome Naglfar. He also gives the player another Hammerne staff.

When he is not fully dominated by the Demon King, Lyon's speech and behavior are different whether he talks to Ephraim or Eirika: when he faces Eirika he seems sad, remorseful and gentle, as well as somewhat willing to hear her; when he speaks to Ephraim, he is much more aggressive and straightforward, saying that despite cherishing his friendship with Ephraim, he wants to win a battle against him at least once.

Sometimes though, he falls completely under the Demon King's control and loses any semblance of courtesy and instead becomes menacing and dark; in this case, his speech often appears in a black box with white text, instead of a white box with black text. When this happens, it is likely that the Demon King is speaking through him as a medium, as Fomortiis himself speaks with that same black text box.

Lyon suffers from the curse of having horrible stat bases, yet he has some of the greatest growths in the game (in the English version). If you are going to use him, just max him out with stat boosters, at which point he will become very effective. If planning to use him, ensure that he gets enough Body Rings to reach 18 Constitution, as Naglfar is incredibly heavy. As the tome also has unlimited uses, he does not need to be given any dark tomes apart from Nosferatu and Luna.

As a Necromancer, he can also summon Phantoms to aid him in battle. They are similar to Knoll's and Ewan's Phantoms (if they were promoted to a Summoner), though they boast much higher luck.

Since he is only unlockable in the Creature Campaign, he cannot support with anyone and cannot be recruited in the main game.

It should be noted that his class, Necromancer, has the highest stat caps of any playable character available in the game, with each stat, aside from HP (60), Skill and Speed (both 25), at 30. This trait is shared with Idunn's Mage Dragon class as well as Nergal's Dark Druid class.

Shadow Prince
Prince of Grado; not fond of fighting. A childhood friend of Ephraim and Eirika. Appears in Fire Emblem: The Sacred Stones.

“Do you challenge me? You humans are so inconstant. You've forgotten what it is to fear me.”
—Chapter 17 in The Sacred Stones

Eirika: Lyon, please! You must stop! I...I have no wish to fight you!
Lyon: Heh heh..Wretched girl. Are you listening, Lyon? Is this truly the girl you loved? Then I will use these hands to tear her limb from limb!

Ephraim: Where's Lyon? What have you done with our friend?! ANSWER ME!
Lyon: Heh heh...What a splendid fool you make. Shall I dress you in a jester's cap? Shall we watch you jape in my demon's court? Lyon is dead. I devoured him. Can you not understand?
Ephraim: Monster!

Ephraim: Where's Lyon? What have you done with our friend?! ANSWER ME!
Lyon: .....Heh heh...How foolish. The one you seek is already dead. I have cast him intro the abyss from which i crawled. That weakling is gone. Only the demon king remains!
Ephraim Grr... Monster!

“Come, and face your death! I'm waiting, you miserable fool. Your corpse will make a perfect offering in my resurrection!”
—Final Chapter Battle Quote in The Sacred Stones

Eirika: Lyon... I hope you're watching. I will defeat the Demon King.
Lyon: Heh, do you really think your blade can hurt me? Cut me and see! If you can even hit me, that is.

“Hahaha....Hahahahaha....HAHAHAHAHA!”
—Final Chapter of Eirika's route in The Sacred Stones

Lyon: Tell me, Ephraim: do I look like I’ve grown stronger? The last time we dueled, I was too weak to test you.  Why, I was so weak, I even lost to Eirika…
Ephraim: ……
Lyon: I’ve sacrificed the lives of many good people.  I’ve committed many unforgivable sins.  The caring heart that I once possessed died long ago…  And I’ve grown stronger because of it.  I’ve grown strong enough to defeat even you, Ephraim.
Ephraim:  …No, you haven’t.  You’re still no match for me.  You were never one for combat.  It’s not in you.  You should never have chosen this path.
Lyon: ……
Ephraim: ……Here I come, Lyon.

“Where... Where did I go wrong...”
—Final Chapter of Ephraim's route in The Sacred Stones

Lyon is illustrated in the trading card game Fire Emblem Cipher with the following cards: 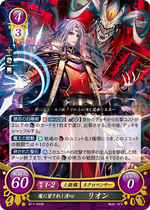 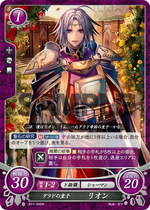 The name "Lyon" probably comes from "Leon", a very popular name in Medieval to Early Modern Europe which is derived from the Greek word meaning "lion".

It is also the name of a city in eastern France. The city was originally founded by Romans and named Lugdunum. This name comes from the Celtic god Lugus, meaning light (from which the name Lugh is derived), and "dunon", which means "hill". The Romans associated Lugus with Mercury; the name Lugdunum therefore translates to either "hill of light" or alternatively "hill of crows". [1]