joins in Chapter 3-4: The General's Hand

Kelly Baskin
[view]
“What!? No way! That stuffy know-it-all doesn’t need it! Look at me! I’m so tiny and helpless, I need all the help I can get. You wouldn’t want me to get hurt, would you?”
—Lyre in a conversation with Ranulf and Kyza

Lyre is a Cat Laguz of the Beast tribe, as well as the younger twin sister of Lethe. She possibly has feelings for Commander Ranulf. She hates war and fighting, but joins the army to be with Lethe and Ranulf because she wants to fight alongside her sister and could not bear to see her die.

Lyre is first introduced in Chapter 3-1 by helping Lethe and Mist pass out poisoned food to knock out enemy guards, and then serves as an NPC ally unit along with Lethe for that chapter. She officially joins as a playable character in chapter 3-4.

Despite being Lethe's twin sister, Lyre's personality is a near polar opposite. She is playful and outgoing, counter to Lethe's more serious and stern nature. When introduced, she is also more at ease with beorc than Lethe initially is in Fire Emblem: Path of Radiance.

However, Lyre seems to be the pettier of the two sisters. In a base conversation, she claims that Shinon is lucky that she did not claw the smile off his face after an altercation between the two and Gatrie. In a different info conversation, she begs Ranulf to give her the gift he offers instead of giving it to Kyza, her excuse being that she is the smaller and more helpless of the two.

One look at Lyre's base stats will definitely make many players raise an eyebrow; she is inferior in every way to her sister, Lethe, and gets lower availability for not being present in Part II. While she gets better growth rates in some areas, she sadly gains EXP just as slowly as her sister, and lags behind Lethe so much, that even when reaching similar level (level 21), Lyre will most likely still be inferior to her, making Lyre's one defining trait of being a Laguz growth unit pretty difficult to defend. Bonus EXP is also a difficult proposition, as growing a Laguz unit through this process is always more expensive than a Beorc equivalent.

Lyre's problems are similar to Lethe's but amplified with even lower base stats, while not being able to contribute in any part of the game with her bases. To give an idea, she has similar attack power to Mist at base (8 Strength) with her Florete, sharing similar Strength growth rate, but Lyre gains EXP much slower, is stuck to 1 Range, has lower availability (and Mist can easily get a lead through the first three chapters), and has to deal with cats' very quick transformation gauge. Of course, Mist cannot double nearly as reliably, but Mist's primary function being obviously to heal and not to attack, just about any player can see the issue with Lyre.

She will very quickly lose her Speed lead on the enemy, becoming unable to double, and will always deal pretty low damage to them. Upon joining the team, there are even enemies that Lyre will only deal 1 or 2 damage against.

She is considered one of the worst units of the game, and rightfully so. Lyre might be rather accurate and quick, but it doesn't mean anything when her damage output is negligible to non-existent against her enemies with no easy way of fixing it outside of using invaluable stat boosters (which won't completely fix her), and her stat increases being so out of reach, during a part of the game where she has to fight for a deployment slot with some of the best units of the game, and with Ranulf being forced deployed in Part III when available, a much better Cat Laguz.

Lap Cat of Luxury
A cat warrior from Gallia, home of the beast tribe of laguz. Wrapped in a kimono for the first time, she is enjoying herself to the fullest. Appears in Fire Emblem: Radiant Dawn.

Lyre: Ugh... I can't believe it... I've gotta fall back... The rest of you guys think you can pull it together?

Lyre lived free and wild in the forest. She often told her young comrades of the war and the heroes therein.

Lyre is illustrated in the trading card game Fire Emblem Cipher with the following cards: 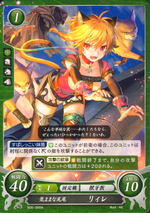 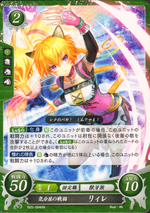 The lyre (lyra) is a musical instrument from Ancient Greece. It is said to have been invented by Hermes, messenger of the gods, though it is probably more often associated with the mythical poet Orpheus, master of the lyre.

In Greek mythology, Orpheus of the lyre wandered into the underworld of Hades, in grief over the loss of his wife. There, it is said in some stories, that he had to cross the rivers of the underworld, Styx and Lethe.