Machyua is a playable character from Fire Emblem: Thracia 776. She is a member of the Magi Squad, and the lover of Brighton.

Machyua first appears in Chapter 4, where, under orders from Ced, she, along with Brighton and Lara, breaks into the Munster dungeons to rescue Leif after the prince is captured by Raydrik.

Machyua then goes on to continue supporting Leif in his cause to liberate Northern Thracia from the Grannvale Empire. She travels to Munster thereafter, helping out in its rebuilding efforts, along with those of her hometown. Machyua also marries Brighton and opens a small shop with him.

Due to her limited characterization, not much is known of Machyua. But from what little screen-time she has, it is evident that Machyua is a brave woman, taking up arms to join the Magi Squad and oppose the forces of Munster.

Machyua is a very worthwhile character to train, as she is the only sword fighter who promotes to Hero instead of Swordmaster. This means that she will get higher Strength, Defense, and Build promotion bonuses, while still being able to cap Skill and Speed.

As a Hero, Machyua trades Movement bonuses for the use of Axes, although she starts off with the lowest rank. As a result of this, she will have some difficulty keeping up with mounted units on outdoor maps over long distances, and notably Brighton, with whom she shares a support.

Machyua's stats and growths are solid, her somewhat low Strength compensated by a FCM of 3 that helps her perform critical attacks more reliably, especially when she wields a Killing Edge or a Killer Axe.

With a Constitution base of 6 and a bonus of 2 upon promotion, Machyua will have little trouble using an Iron Axe. It is still a good idea to further boost her Constitution with the Nál Scroll, allowing her to equip heavier axes and swords without suffering a from significant Attack Speed losses.

If well-trained with a high Axe rank and Constitution, Machyua can make full use of Master Axes, which work great with her Vantage skill. She can also use Meisterschwerts, whose 10% critical bonus, pairs well with Machyua's FCM.

"Machyua returned to Munster, where none could match her sheer zeal and passion for rebuilding the kingdom. She soon married a fellow soldier who had also served in the war, and gave birth to a child. Despite these changes, her drive to aid Munster never wavered, and she stayed devoted to the city for her entire life."

Machyua is illustrated in the trading card game with the following cards: 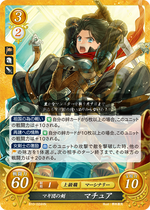 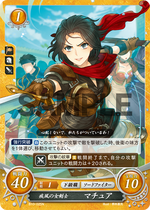