Paladin
[view]
“Hmm... They're not fleeing... They're actually headed this way. It appears that we have underestimated the courage of our foe.”
—Mackoya

Mackoya is a boss character in Fire Emblem: Path of Radiance. He is a general of Daein and subordinate of the Black Knight who guards Crimea's coastal region, appearing as a sub-boss in Chapter 11 of Fire Emblem: Path of Radiance, as the player does not have to defeat him to complete the chapter. Should the battle end with Mackoya still alive, the Black Knight and Sephiran will convince him to leave, never to be seen again.

Vs Ike
Mackoya: Are you the leader of this company?
Ike: I am.
Mackoya: You are the ones who freed the prisoners from our castle, were you not?
Ike: And if I were?
Mackoya: Hmm... It appears my assessment was slightly inaccurate. I believed it to be the work of Crimean soldiers who had briefly regained their morale.
Ike: Sorry to disappoint you, we're nothing but a simple company of mercenaries.
Mackoya: Ha! Would you, by chance... Would you be the same mercenaries giving succor to Princess Elincia?
Ike: Enough talk. Move or die.

Mackoya: M-my lord Black Knight! A ship is departing! If we ready our own ship and set sail without delay, we can overtake it immediately!
Black Knight: ...
Sephiran: Listen to me, Daein general. You will withdraw from this place. I will not allow you to pursue that ship.
Mackoya: Who are you to speak to me so? Do you have any idea who I am?
Black Knight: Gather your men. ...Withdraw.
Mackoya: Yet we--
Black Knight: I will not repeat myself. Do it now.
Mackoya: Yes... yes, at once! 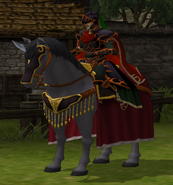