View source
watch 00:58
Who is Mae?
Do you like this video?
Play Sound

Cherami Leigh
[view]
“Look, I know you set out on this journey with a solemn purpose and junk. And WHILE I know that... I can't help but feel super crazy excited about it!”
—Mae in Echoes: Shadows of Valentia

Mae is a playable character from Fire Emblem Gaiden and its remake, Fire Emblem Echoes: Shadows of Valentia. She is 17 years old.

A young yet skilled mage, Mae joins Celica's group not only to watch out for her, but also to keep an eye on Boey, who has sworn to protect Celica despite the fact his skill is quite lacking compared to his eagerness. Her role is Celica's servant, however, the two are very close friends. She accompanies Celica on her journey towards the Mila Temple.

When the Mila Temple is seized in Act 3, Celica will promote and don the Zofian Circlet. Mae remarks on how beautiful Celica looks, however, Boey calls her an "idiot" for not using the correct name, Anthiese, as Celica has just assumed her heritage and is now displaying it publicly. Celica assures Boey by telling him she prefers to be addressed by Celica.

When Celica's party reaches Duma Tower in Act 4, despite trying to convince Celica not to surrender herself to Jedah because he wants to turn her into a mindless witch, he teleports Mae and the rest of Celica's group into the catacombs of the Duma Temple, where they are attacked by Terrors.

In Act 5, after Celica is revived and reunited with Alm, Mae, along with the rest of Celica's group, meets up with Celica again, much to Mae's relief, and she tells her that they ended up at the same location as the other group because she heard a voice (which Celica deduces being Mila's spirit) and followed it. Mae (along with the rest of Celica's army) then assists Alm and Celica in taking down Duma.

After the war, Mae continues to work with Boey at the church of Zofia. In the remake, the two are also eventually wed and bore children, though their feuding never ceased.

An adept mage who is well aware of her talent, Mae is constantly in pursuit of self-improvement and is a prime example of a "type A" personality. Such traits causes an intense rivalry with Boey, whom she frequently tries to outdo at everything while teasing about his insecurities. Yet, Mae values Boey's presence and cares about him despite all of their clashing.

Often seeking approval from others, Mae desires to be viewed as a highly dependable person. She is often very enthusiastic, generally speaking in an exuberant, confident, and even arrogant manner. Such demeanor manages to be contagious, as Celica states that Mae has always cheered her up when she was sad or lonely. Despite her constant cheerfulness and bombastic mannerisms, Mae is subtly self-conscious of her level of maturity, appearance and deportment wise, especially when compared to her retainer partner, Boey, and the ever reserved and mature Celica. She longs for a carefree lifestyle after the war and has a fondness of the ocean.

She and Celica are extremely close to the extent that she is profusely attached to her. As a result of this, she is very concerned for Celica's emotional well-being and survival to the point of verbally rebuking enemies that threaten her safety, even if it places her life in harm's way. In addition, Mae's final battle quote reveals she doesn't care about Duma or the world ending, she simply wants Jedah to pay for hurting Celica.

In Act 2, talk to her at the Priory (needed to progress).

Mae is an average Mage. She has a typical glass cannon build with high Strength and low HP/Defense, but lacks the Speed to be truly dangerous which is exactly what keeps her from being a great unit. Her low Speed also makes her very vulnerable to being Double Attacked. She has somewhat high Resistance for a Magic unit, which makes her decent at fighting other Magic units. Unfortunately, she has the lowest starting HP and HP growth of all Mages. It is worth noting that Mae has the lowest overall growths in the game (excluding Pre-Promoted units), though this does not hurt her capabilities that much when comparing her to other Mages.

When you first get her, she is the best attacker in your group, outdoing even Celica initially. She starts with Thunder, which makes her the only 3 range unit that Celica starts with. Unfortunately, there is a rather large level gap between Mae's new spells. However, her spell list is actually quite balanced. She will learn Aura, which is a very powerful single hit spell, as well as Angel which is very effective at defeating monsters.

All in all, Mae is an okay Mage unit. Most Mage units in Gaiden suffer her same low Speed problem, but she hits hard enough to be reasonably useful and comes with some nice abilities. She will usually wind up better than Boey simply due to her spell list, but not by much. Her low Speed really hurts her offense and survivability and her low HP reserve makes consistent spellcasting dangerous.

Mae comes much improved in Echoes, with very high attack and speed growths but still relatively low HP growths, making her something of a glass cannon. These growths should make her an extremely potent offensive unit, capable of doubling most of her opponents; her low defenses should not be a problem, as mages should not usually be on the front line.

Compared to Boey, Mae is the offensive unit while Boey is the defensive one. Her high attack and resistance make her useful in mage-on-mage combat, although her low HP and defense leave her vulnerable to attack by some melee units, particularly mercenaries. Sonya, on the other hand, has stats that lie between the two starting mages, with higher HP, skill, defense and resistance than Mae, and higher speed, luck and resistance than Boey.

Mae in Echoes also has access to Silence, which can be helpful for neutralizing Cantors and dangerous Arcanists, especially with her high attack growths extending her range.

Depending on how much work you put into Mae, she can be one of the strongest units in Celica's party, although care must be taken that she is not exposed to too much enemy fire.

Bundle of Energy
A mage from Novis and a dear friend of Celica. Always cheerful and energetic, but she has a tendency to get carried away. Appears in Fire Emblem Echoes: Shadows of Valentia.

Mae is one of the most powerful Blue Mages in terms of raw damage with a base 36 Atk and a decent base 30 Res that allows her to duel mages and run Ploys is needed. What holds her back is not only her abysmal physical bulk, but also her middling Spd at 30 which is at a spot where she cannot score her needed doubling threshold that the most powerful Blue Mages have unless she has a Spd Asset, which even then is barely and improvement. Mae could be considered a decent budget option for a blue mage as her potential is high given proper inheritances, though she competes with Tailtiu for the same role.

Mae is currently the only owner of a Blarowl tome, boosting her four core stats depending on how many allies are adjacent to her during combat. This requires some synergy to use properly, but Mae is a decent choice for this weapon though other options better use it while Mae would prefer a more offensive geared tome. The update gave her a personal weapon in the form of the Book of Orchids, with 2 more points of Might and having an innate Death Blow 3. When special refined, it gets Atk/Spd Link 3, which combined with r a movement support skill of a ally, can give her 12 points of attack when starting combat.

Draw Back allows Mae to pull an ally out of danger, which is a typical skill used by non-staff ranged units. Desperation is another important skill for most offensive mages and Mae is no different in making the most of this coveted skill for immediate follow-ups if she scores a double against her opponent. B. Tome Exp. boosts the EXP gains of blue tome units deployed onto a map with Mae. The short term benefits are only good for training and only to get your character to Level 40.

Mae’s physical bulk is an issue and leaves her vulnerable to Green and Blue units with any form of solid physical damage. Hyper offense characters like Bridal Cordelia and Cherche easily dispatch her while some Reds can do the same despite the color disadvantage such as Elincia and Karla. She can engage on enemies from a distance, but Distant Counter users create more problems as most common users can survive a hit, even some bulky reds, and smash through her Def. All forms of Hector, Fallen Hardin, Fjorm, and Dorcas are strong checks to Mae. Dragon units also have the ability to attack her lower Def if their breaths are refined

Without any personal tome to her name currently, Mae is dependent on a lot of outside help. Luckily, Mae already comes packing with two skills that are generally used on an Offensive Mage like her. Blarblade takes ally stat buffs and uses it to empower her attacks. Glimmer is useful with this tome or if sticking with her base tome. Fury is an acceptable Skill A just to have the flat stat boosts and give mainly her Spd a better total so she can double more units. Skill C is flexible but as mentioned above, she can run ploys or otherwise popular wave skills

(If Boey is alive)
"She works together with Boey in the Church of Zofia."

(If Boey is dead)
"She still sustains a bit of shock from the loss of her bicker buddy Boey."

(If Boey is alive)
Mae returned to Novis and resumed her work at the priory with Boey. The two bickered endlessly before—and after—their wedding, while managing to raise many children during the pauses between barbs. Both of them often remarked that they couldn't possibly be happier.

(If Boey is dead)
After the loss of her verbal sparring partner, Boey, Mae fell into a deep depression—but the encouragement of her friends eventually helped light return to her life. She spent her days helping others at the priory, where she was beloved for her kindness and wicked humor.

Mae is illustrated in the trading card game Fire Emblem Cipher with the following cards: 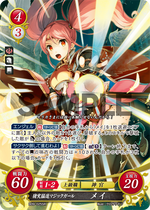 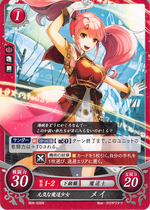 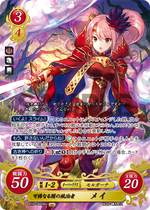 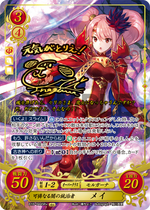 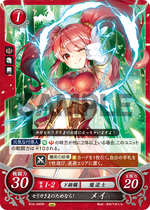 Mae is a feminine given name and a variant of May, which derives from Maia, the name of the Roman goddess of Spring growth.