--
[view]
Mage Dragon (魔竜 Maryū, translated Magic Dragon in the Japanese version, Demon Dragon in The Blazing Blade, and Witch Dragon in the fan translation of TearRing Saga) is both a race and a class of Dragons that recurrently appear across the Fire Emblem Series, beginning from Fire Emblem: Shadow Dragon and the Blade of Light. An uncommon type of Dragon, Mage Dragons expel either Magic or Dark Breath in order to damage their foes.

In Shadow Dragon and the Blade of Light and its remake, Mage Dragons are a powerful enemy-only class that, unlike other dragons who deal physical damage, inflict magical damage instead. The class is also immune to magical attacks. Initially appearing as unassuming humans, Mage Dragon Manaketes only assume their dragon forms after releasing the power stored within Magestones.

In Mystery of the Emblem, Mage Dragons lose their immunity to magical damage, but are compensated with a base Resistance of 20. This renders them extremely resistant to most spells, save for powerful ones (such as Aura) or those cast by magic users with high Magic. Mage Dragons are still largely connected to Manaketes, shape-shifters who transform into Mage Dragons through the employment of Magestones. The feral Mage Dragons function as exceptions to this rule, acting as standalone entities that are permanently confined to their dragon forms.

Unlike other titles, Mage Dragons in this title share the same breath weapon as fire dragons, which negates defenses of non-manakete units, much like the Flametongue weapon the Fire Dragon from Blazing Blade uses. Any Manakete can transform into a Mage Dragon with the use of a Magestone, regardless of whether or not they are members of the Mage Dragon Tribe.

The class later reappears as the Demon Dragon in the Elibe Series, primarily in The Binding Blade, where it acts as Idunn's personal class when she is fought as a boss in the Endgame chapter. This version of the class employs Dark Breath as its weapon of choice, which is animated with actual fumes of dark breath, claw grapples, and tail whips.

In the remake of Mystery of the Emblem, only feral Mage Dragons employ a separate Magic Breath weapon as their means to attack, while Manaketes directly use Magestones as weapons instead. As before, any Manakete can transform into a Mage Dragon with the use of a Magestone, regardless of whether or not they are members of the Mage Dragon Tribe.

In the Archanea Series, Mage Dragons are one of the main Dragon Tribes, joining with the Dolhr Empire in order to wrest control of the continent from mankind. They are also known as the Basilisk Tribe, an alternate name that is derived from Shadow Dragon and the Blade of Light itself.

In the Elibe Series, Demon Dragons are corrupted Divine Dragons capable of producing swarms of obediant War Dragons to fight in battles. During The Scouring, the warring dragons like Jahn attempted to convince powerful Divine Dragon Tribe, who had remained neutral, to have one of its members become a Demon Dragon so they could effectively counter the greater numbers boasted by humanity. The Divine Dragons refused to cooperate, saying it was an abomination against nature, but the warring dragons kidnapped the Divine Dragon Idunn and forced her into becoming a Demon Dragon. Furthermore, in order to make Idunn obey them, the leader of the dragons destroyed Idunn's soul so she would have no distinct will of her own.

In TearRing Saga: Yutona Eiyuu Senki, the term "Witch Dragon" is not an actual type of dragon, but rather a name ascribed to the widely-feared earth dragon Kranion after it went into a rampaging frenzy at the conclusion of the Leda-Salia War.

Mage Dragons typically resemble Eastern Dragons and possess elongated necks. They are not depicted with wings except in Shadow Dragon and the Blade of Light, where they are a palette swap of Fire Dragons, and also in The Binding Blade.

An illustration of a Demon Dragon from The Making of Fire Emblem 25th Anniversary Book.

A level 10 Mage Dragon Manakete, as he appears in the fifth series of the TCG.

A Level 10 Mage Dragon, as it appears in the fifth series of the TCG.

Portrait of Idunn as a Demon Dragon from The Binding Blade.

Generic class portrait of a Mage Dragon from New Mystery of the Emblem.

CG artwork of Idunn as a Demon Dragon from The Binding Blade.

Battle model of a Mage Dragon from Shadow Dragon and the Blade of Light. 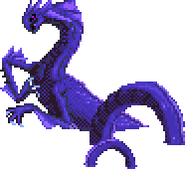 Battle model of a Mage Dragon from Mystery of the Emblem.

Attack animation of Idunn as a Demon Dragon from The Binding Blade.

Battle model of a Mage Dragon from Shadow Dragon and New Mystery of the Emblem.

Map sprite of a Mage Dragon from Mystery of the Emblem.