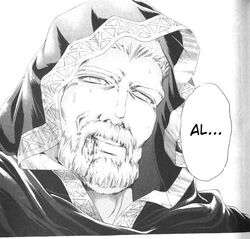 -
[view]
“Fire burns everything, and then gives birth to something new.”
—Magough to Al in Chapter 1

Magough is a manga character in Fire Emblem: Hasha no Tsurugi. He is the foster father of Al. He is the best swordsman of the Blackbone Clan, but Melitha changed his heart. After her death, he pretended to temper the Champion's Sword and raised Al as his own child. He was defeated by Al at chapter 43 in the manga. At the start of the manga, he lives peacefully in the mountains with Al, but at an unknown point he becomes a member of the Blackbone Clan again and is controlled by Audamorze. In the Blackbone Clan, he goes by the name One-Horn because his bull-like skull mask has one horn on and one horn snapped off. In Al's flashback he is shown teaching Al sword techniques. He has a special sword attack, which Al mentioned as a child as being "super cool".