Magvel (Japanese: マギ・ヴァル, Magi Val) is the continent which serves as the setting for Fire Emblem: The Sacred Stones. All of the countries in Magvel (except for Carcino) were founded by one of the ancient heroes who sealed away the Demon King.

Long ago, monsters roamed the land, and humanity was nearing the brink of extinction. In desperation, mankind appealed to the heavens and it was granted through a blinding light. With the power to dispel evil, five glorious treasures as Sacred Stones were used by Morva and the five heroes to combat the hordes of monsters and the Demon King himself.

After a gruesome battle, the Demon King is defeated and his body is buried in the Black Temple within Darkling Woods, with his spirit sealed within the Sacred Stone that would eventually belong to Grado. The five Stones were then distributed to each hero, who would become the rulers of Renais, Frelia, Jehanna, Rausten, and Grado. As each country enshrined its Sacred Stone in a secure location, relative peace settled into the continent for the next 800 years.

War of the Stones

Things started to change some time around 801, when prince Lyon began his experiments with Grado's Sacred Stone, initially for the betterment of humanity. However, in the year 802 Lyon's father, Vigarde had died. Unable to cope with this, Lyon pushed his experiments further, which allowed the Demon King to possess him. And, in the year 803, used him by setting Grado to war with every other country on the continent.

During the war, every Sacred Stone on Magvel was destroyed except for Rausten's stone. Erika, Ephraim, and their companions assembled and eventually led the final assault on Darkling Woods, and sealed away the revived Demon King once again, while destroying his true body, preventing a future resurrection.

At the end of this conflict only a single Sacred Stone remained. And while the countries started rebuilding, a disastrous earthquake struck Grado, though Renais chooses to aid Grado in recover.

The kingdom of Renais is ruled by King Fado, the peerless Warrior King. It is the home of the twin lords Ephraim and Eirika.

The kingdom of Frelia is ruled by Hayden, the venerable Sage King and the father of the pegasus knight Tana and the sniper Innes. Frelia is also home to pegasi which are trained for military purposes.

The kingdom of Jehanna is ruled by Ismaire, the Queen of the White Dunes. Her son is Joshua, the myrmidon.

The theocracy of Rausten is ruled by Pontifex Mansel, the Divine Emperor. His heir is his niece L'Arachel, the troubadour. It was founded by the saintly Latona, one of the Five Heroes.

The Grado Empire is ruled by Vigarde, the stalwart Silent Emperor. His son, the necromancer Lyon, is a good friend of Ephraim and Eirika. Grado is the largest country of Magvel and its eponymous founder, Grado, was the leader of the Five Heroes who stood against the Demon King.

The emerging mercantile republic of Carcino is governed by a council of elders and, unlike the other nations of Magvel, is more of a democratic-republic than a monarchy or theocracy. It was established more recently than the other nations and is the only nation not founded by one of the Five Heroes. 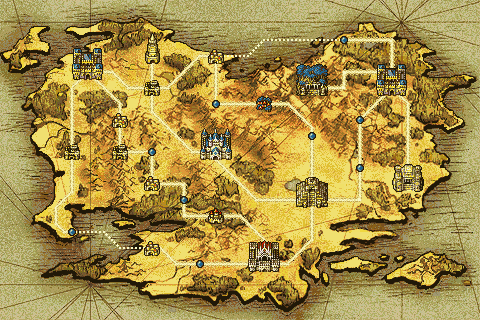 One possibility could be that the 'vel' in 'Magvel' comes from the 'Vel' in Hindu tradition, a mythical spear wielded by the god Murugan. Also, spears used by the Tamil people of south India were called 'vels.' The 'mag' in 'Magvel' probably refers to 'magic,' but it could also imply 'magna,' which means 'great' in Latin, or to 'magi,' which was the name for the priestly upper class of ancient Persian society.

In the Japanese version of the name, マギ・ヴァル (Magi Val), the first part is quite clearly means "magi." The latter part is still vague, as ヴァル does not hold any meaning on its own. It may be derived from the Norse 'valr', which means "those slain in battle."