“My mother told me that Queen Liza was one of the finest Pegasus Knights in all of Salia when she was younger. I heard that she fought on par with the Six Heroes during the Leda Liberation War, and it was there that she met King Loffaru and the others. With all of that riding skill in your blood, I'm sure you could be a pegasus knight if you wanted. The next time I visit my mother in Salia, I'll ask if she has a spare pegasus flute. Then we can soar through the skies together! Oh, and let's bring Verna and Frau along too! We'll all race to see who can fly the fastest!”
—Mahter, in a conversation with Sasha

Mahter (マーテル Māteru, fan translated as Martel) is a playable character from TearRing Saga: Utna Heroes Saga. She is a pegasus knight in service to Salia. She is also the second daughter of Roberto and Clarice, making her younger than Verna and older than Frau. Her pegasus steed is named Ivis (アイビス Aibisu, fan translated as Ibis).

Mahter resides in the Temple of Mars until Ezenbah sends her on a mission to bring Enteh back. However, she eventually discovers that Enteh is traveling with Runan and joins his army to fulfill her orders. If she is sent with Holmes after the first route split, she can encounter Frau in Blood and recruit her to the army.

In the ending, Mahter is offered to assist Rishel in rebuilding the Temple of Fire. She immediately assumes that he is attempting to make her into a substitute for Enteh. After Clarice calls her out for her rudeness, Mahter accepts the offer and agrees to become a cleric, but states that she does not necessarily requite Rishel's romantic feelings for her.

Like Verna, Mahter has a tendency to become angry when Frau is in danger, although she is more harsh about it. She supports Rishel's succession of the Fire Priestood, knowing that their other relatives are incapable of it. Rishel claims that Mahter is unreliable and pushes all responsibilities onto him. She is particularly kind towards Katri and expresses concern for her safety because she is aware of her true identity as Princess Maria of Salia.

Automatically from the start of Map 4.

Mahter is best described as a solid fighter with great flight utility. While her combat ability is not amazing, she does learn a few powerful skills, and she competes very well with the other Pegasus Knights. Although Sasha will most likely surpass her in power due to having multiple promotions, Mahter has a major advantage in that she comes with decent base stats and a mount. However, she requires one of the very rare Dragon Flutes to promote, so in order to upgrade her to a Dragon Knight, the player will most likely have to forgo training either Sasha or Frau to their maximum potential. She can also support with many characters, including her sisters and Sasha, whose rivaling Movement makes it easier for her to receive support bonuses from them. 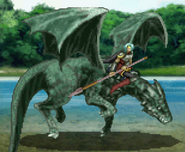 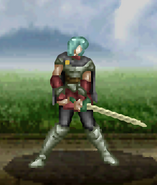