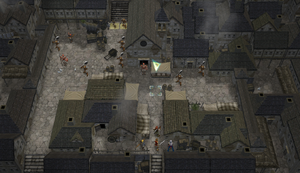 Nolan (Gained at beginning of Chapter)

Tellius – The year 648 – Early summer. The northeastern nation of Daein lost a bloody war with neighboring Crimea three years ago. Crimea, however, abdicated its right to rule Daein and passed sovereignty of its former enemy to the powerful Begnion Empire. Daein's future is now subject to the whims of the empire. Begnion's occupations forces have gathered all of Daein's men of fighting age and put them to work in labor camps. Their work is brutal and void of purpose, designed to break both body and spirit. The remaining population faces poverty and starvation as the fields lie fallow. A band of young heroes has escaped the Begnion army to form a group called the Dawn Brigade. Fighting for a free Daein, they alone have stood against Begnion's forces. They alone have shouldered the hopes of their nation. Among the company is a young girl named Micaiah, who is said to possess mystical powers. The people of Daein have come to know her as the "Silver-Haired Maiden." They have come to think of her as the savior for whom they hadbeen waiting. Begnion's forces have tried time and time again to capture and silence the Dawn Brigade. However, Micaiah's ability to sense impending danger has thus far allowed the Dawn Brigade to evade the empire's grasp.

Maiden of Miracles is Chapter 1-1 of Fire Emblem: Radiant Dawn

Your strategy in this chapter will depend largely on which mode you're playing. In Easy mode, you just have to kill the boss to win, where as in Normal/Hard modes, you have to escape in 10 turns.

In Easy Mode, you'll want to move forward using Nolan/Edward as shields and let Micaiah and Leonardo pick off enemies from behind. You could kill the boss quickly; however you're better off killing off all the enemies before you win, for extra experience. Be careful with the boss, as his attack power is reasonably high due to the steel sword, and he'll probably have a few points of critical on whoever attacks him, so there is that small chance it'll hurt a lot. Just weaken him from a distance with Leonardo and Micaiah, but finish him off with Micaiah so that she gets the experience.

In Normal or Hard Mode, it's a bit different than in Easy mode. You'll have to defeat the boss or the guy next to him to clear at least one escape tile and have Micaiah escape within 10 turns. It is advisable to lead with Nolan and have him tank the brunt of the damage and have Leonardo and Micaiah pick up kills for the experience. Lead with Nolan and have Edward help where he can, he can't take as many hits, but he can still take a few and dish out some damage. Make your way straight for the boss, taking care of the units that attack you on the way there. Don't go too far out of the way, as you can lure most of the units to you pretty easily. After clearing at least one escape tile (e.g. by defeating the boss), Micaiah can get through and escape. You also get extra bonus experience for having your other characters escape BEFORE Micaiah does, so it's advisable that you have as many of them escape as you can as well. Later on in the chapter, extra enemies will start to spawn out of where you started. Ignore them; they are too far away to do anything to you, and will barely catch up to the boss's area if you are already there when they first arrive (they first arrive on the eight turn).

Visit the church and don't forget to get the house to the left of where you start - it's easy to miss.