Dancer (As a Mirage Master in Encore)

Ami Koshimizu
[view]
“...Now, let's climb up to stardom together.”

Maiko is a former model and the founder/president of Fortuna Entertainment. As its head, she leads its efforts in recruiting and employing creative talents, but her true purpose in running the company is recruiting those with the potential to become Mirage Masters. Although she is not a Mirage Master herself, she can assist the party with Backup Skills, and in Encore she can participate in Session Attacks. Her birthday is February 15.

In Chapter 2, Maiko is kidnapped by a corrupted Nobu Horinozawa and must be rescued by Itsuki and the others. Maiko and Nobu were once partners in their work, with much of Maiko's most popular modeling captured by Nobu's camerawork. Together, they collaborated on a series of photo books entitled "My Complex." The series was intended to be a trilogy, but only the first two volumes were completed before Maiko gave up modeling to found Fortuna Entertainment and fight back against Mirages. The first volume of My Complex provides inspiration to Tsubasa, who through studying Maiko's poses, attitude and composure, is able to understand what Nobu wants in his models. By taking advantage of this, the party is able to reignite Nobu's passions and allows him to drive Gangrel from his body.

After her rescue, Maiko continues to run Fortuna Entertainment while serving as a mother figure to the Mirage Masters under her employ. She regularly meets with other members of the entertainment industry in order to secure jobs for the talent her company represents, and also holds secret meetings with law enforcement to ensure that the Mirage Masters are able to perform their duties unimpeded. Later in the game, she dreams up various collaborations for the Mirage Masters that take the form of Duo Arts.

Maiko, a former model (gravure idol in the Japanese version), takes a motherly, protective attitude toward the Mirage Masters she recruits. She is a quick thinker and highly observant. Maiko is also a fan of alcohol; she often spends late hours drinking with other members of the entertainment industry, and as a result often suffers from hangovers. She also has a playful, teasing side, and jokingly flirts with Itsuki at points hoping to catch him off guard, though she does this for her own amusement and doesn't have any serious romantic intent.

Maiko Shimazaki - Fortuna President
With Itsuki and Ayaha, Maiko continued supporting Fortuna's growing stable of talent with her ideal of creating a casual environment. They tried to ban drinking in the office, but Maiko adamantly opposed it, declaring that it would "ruin everything she's worked for."

Maiko Shimazaki - Tipsy President
After helping young talents succeed in show business, she gained a reputation for her knack for seeing the true potential in entertainers. Fortuna expanded, and although she is busy managing it, she holds yearly auditions, and is always excited to see new talent.

Maiko Shimazaki - Team Mom
After the incident with Horinozawa, Maiko began considering a return to the modeling business. After the issue of the Shadow Dragon was dealt with, she started dieting more and more. The release date of the next volume of "My Complex" may be closer than ever...

Maiko Shimazaki - Goddess Fortuna
After the success of her collaboration projects, Maiko's reputation soared and she garnered the attention of many media outlets. Fortuna became a household name, and thanks to Maiko's ingenuity and capabilities, the agency went on to produce even more new stars.

Maiko Shimazaki - The Legend's Return
After stepping down, Maiko made a quick comeback in to the modeling industry. Soon enough, the third volume of "My Complex" was published. The media dubbed her "Everyone's Big Sister," and she made many appearances in magazines, TV, radio, and countless other platforms.

Maiko Shimazaki is illustrated in the trading card game Fire Emblem Cipher with the following cards: 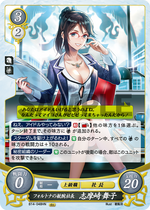 The characters in her given name "Maiko" mean "dance child." Had the finished game had Maiko as a playable character, it would be a reference to her Mirage partner's class, which would have been a Dancer.