Sword Knight (Path of Radiance)
Blade Paladin (Radiant Dawn)
[view]
“Greetings, General! My, you're looking even more dashing and handsome than usual, Your Excellency.”
—Makalov, to Geoffrey, when he becomes drunk in Radiant Dawn.

Makalov (マカロフ Makarofu, Makarov in the Japanese version) is a playable character from Fire Emblem: Path of Radiance and Fire Emblem: Radiant Dawn. He is the older brother of Marcia, and a member of the Crimean Royal Knights in Radiant Dawn.

A mercenary knight from Begnion, Makalov amassed a great debt from gambling, and was employed as a guard for a slave trader to help pay it off. During the Mad King’s War, he was forced to work under a vicious merchant in order to pay back a debt. He met Marcia during a battle, who managed to persuade Makalov to reluctantly join her side.

After the war, he became a member of the Crimean Royal Knights, but would frequent Calill and Largo’s bar in Melior, and would often drink and get drunk by midday, however, and get scolded by not just Largo and Calill, but even by their daughter Amy as well. His superior, Geoffrey, who is constantly appalled by Makalov’s behavior, doubted his ability from the start and eventually gave up on him entirely. Such indulgency being to the point where several attest that, if was anyone other than Queen Elincia ruling over Crimea, Makalov would no doubt have been stripped of his knighthood.

With a self-indulgent and careless attitude, Makalov is fond of drinking, gambling and slackening off from work, resulting in him often traipsing into troubled waters, in the form of both lawful and unlawful forces alike. This has caused Marcia to constantly worry for his well-being, which she openly displays through angry outbursts of tantrums. Regardless, he is shown to lack common sense when it comes to gambling, as he never learns his lesson despite losing over and over again. Despite the major flaws in Makalov's character, he is not a bad person at his core. Rather, he is portrayed as one who just follows his convictions, as he feels no particular attachment to Begnion, nor does he hold any prejudice toward one’s race or social status. Such traits end up receiving special attention and exaggeration from Astrid who holds him in high regard.

While he is also known for being one to exploit his relationships with others, as can be observed through his numerous attempts to milk money out of Marcia, it has also been observed that he can be honest under certain circumstances and showing that he deeply cares for his sister. This can be seen in his support conversation with Astrid, where he returns the pendant he duped her into giving him after being chided by an enraged Marcia. Astrid will then reveal the true value of the pendant to Makalov, whereupon he will be shocked at her willingness to give up her wealth for his sake. In a Base Conversation, he stopped his sister from crying by getting her to laugh a little bit.

Makalov is primarily held back by two factors: his relatively late join time, and his middling base stats. Neither of these are major inhibitors to using him, however. He may be the latest of the potential paladins to join Ike's army, but he's still worth investing into simply by merit of being a mounted unit. In addition to high movement, being able to rescue other units and to make use of the canto ability make mounts in PoR even more useful than they are in other games, which is saying something. While his bases could stand to be better, they're far from unusable, and it won't be long before his high growths in key stats allow him to catch up. Weakening enemies for Makalov to kill and/or using Bonus EXP is recommended.

Upon promotion, the player will be able to choose between bows, axes, and lances for Makalov to use. As with all the other paladins (bar Kerian), Axes is the recommended option. While both lances and axes give Makalov reliable 1-2 range, steel axes being E rank means that he'll have a potent option for attacking right off the bat.

In this game, Makalov will be able to cap his Speed, Luck and Defense with relative ease, with his HP, Strength, and Skill following shortly after. His limited availability may prove to be a liability to his potential, but this should not prevent the player from using him altogether.

"I think I may try to start over in Begnion. Maybe it's too much, too soon... But I just want to live a more responsible life. Plus I'm tired of men threatening to break my knees... Good-bye, Ike!"

Makalov remained as a Royal Knight because the empire was "too strict". Miraculously, he was never fired.

Makalov is illustrated in the trading card game Fire Emblem Cipher with the following cards:

Makalov as a Blade Paladin in Fire Emblem 0 (Cipher).

Makalov as a Sword Knight in Fire Emblem 0 (Cipher).

Makalov's portrait in Path of Radiance. 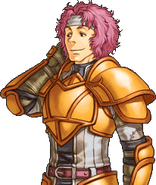 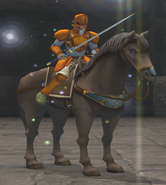 Makalov's battle model as a Sword Knight in Path of Radiance. 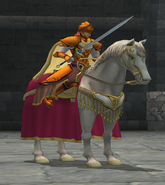 Makalov's battle model as a Paladin in Path of Radiance. 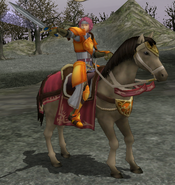 Makalov's battle model as a Blade Paladin in Radiant Dawn. 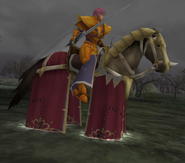