Myrmidon (New Mystery of the Emblem)

Malice is a female sellsword who first appeared in Part 3 of Fire Emblem: Archanea Saga: Thieves' Gang of Justice, along with her father, a Viking Fighter named Dice. She later appears in Fire Emblem: New Mystery of the Emblem, where she and Dice force themselves into Marth's army hoping to be paid greatly for their service. However, their sense of value in money is not quite right as they only asked for a few hundred gold. Malice herself also mentioned they wanted to sell weapons just to buy bread so it's safe to assume they are well acquainted with extreme poverty.

As the Mercenary class is a male only class in New Mystery of the Emblem, her class has been changed to Myrmidon.

*Malice enters with 32 Experience points towards her next level.

Malice is very strong offensively, though her high base defense is outweighed by her low growth. Her growth rate in resistance is twice of the average, even if she still cannot be thrown into a bunch of magic users and be expected to survive.

Deft Sellsword
A capable mercenary who works together with her father, Dice, who in turn loses most of their earnings gambling. Appears in Fire Emblem: New Mystery of the Emblem.

"After the war, Malice received an outrageous reward from Prince Marth. She started a weapon shop with that gold."

Malice is illustrated in the trading card game Fire Emblem Cipher with the following cards: 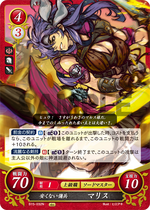