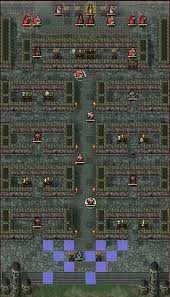 Chapter script
[view]
“The Sable Order fought valiantly to keep Marth's army from reaching Chiasmir, but in the end Grust's knights buckled: the world's mightiest only in song. The League marched on to the Fane of Raman, a holy sanctuary built by the divine dragons to house their most priceless treasures. Here another story was set to begin...”
—Opening Narration

In this chapter are 9 sealed rooms which can only be opened through a Thief, Door Key, or a Master Key. The rooms are patterned diagonally as the bottom left room conceals an enemy Hunter then followed on the second-to-bottom right room and so on. However on the right top single room is an enemy Sniper that may catch you by surprise so if your unit that is opening the doors is too weak, it is ideal to have a stronger unit accompany him/her, the Sniper will drop a Master Seal when killed. The rooms starting from the right and going diagonally however contain 2 chests each, containing: Spirit Dust, Pure Water, Bullion (XL), Bolganone, Seraph Robe, Geosphere, Master Seal and a Speedwing. In the top double door room there are two more chests where the thieves are prone to strike first if left roaming. These chests contain: The Starsphere and the Lightsphere however the Lightsphere has already been pilfered by one of the thieves on the left side.

This map is pretty straight forward: run up north as quickly as is safe and kill those Thieves! You're supposed to be collecting the Spheres, and they will be used to construct Starlight eventually, which will unlock the real Falchion. You may have to use a Warp staff use if things go too slowly, but it's late enough in-game that there's no shame in starting to use those rainy-day charges. Once the Thieves are all dead, you can open the doors at your leisure and send Marth on a loot haul. Careful, some of the enemies hiding within are packing things like a Killer Bow, so keep fliers or units frail enough to die to a critical hit away from the rooms, or else be ready to kill anyone inside whenever you open a door.

The boss of the level is Tiki, a Manakete. If you want to recruit her, she must be recruited by Bantu, who is a weak Manakete if you've trained him, and even weaker if you left him in your barracks at low level. If you just want to kill her, she's only level 1 and will fall easily. Note that she only has 18 HP; if you decide to casually try out the Geosphere to see what happens (13 damage to all units), this can potentially kill Tiki if you were planning on recruiting her.