Leader of the Loptr Church

Chapter 1: Girl of the Spirit Forest (Genealogy of the Holy War)

Dark Bishop
[view]
“Kehehehe... The day of your rebirth is upon us. Through my black magic, the slate of your life will be cleansed, paving the way for your true husband... Your fate was written the day you were born. There is no use in fighting destiny.”
—Manfroy to Deirdre when he abducts her in Genealogy of the Holy War

Manfroy is the Leader of the Loptr Church, the main antagonist of Fire Emblem: Genealogy of the Holy War and a major villain in Fire Emblem: Thracia 776.

Manfroy is the archbishop and leader of the Loptr Church, striving to revive the Dark Lord Loptous. In order to do so, he was the primary architect of a second Holy War through assassinations and political manipulations of various rulers and dukes across Jugdral. He also triggered the Isaachian-Grannvaleian War when he utilized Duke Reptor of Friege and Duke Lombard of Dozel in the assassination of Ayra's father, King Mananan of Isaach and Prince Kurth of Belhalla. Manfroy worked closely with Arvis during this time, whom he blackmailed with the knowledge of the sinister Loptous Holy Blood the latter possessed. Between Chapter 1 and Chapter 2, he manipulated Chagall into assassinating King Imuka of Agusti, which precipitated into a full-fledged war between Agustria and Sigurd's army.

Manfroy later brainwashed Deirdre, aware of her lineage, in Chapter 3 when Sigurd and his army were away at Madino. He then proceeded to send her to Belhalla for Arvis to find and fall in love with, with the ultimate objective being the resurrection of Loptous through the offspring produced by their union, allowing for the restoration of the ancient Loptrian Empire. Manfroy was supposedly present during the Battle of Belhalla, as it is revealed that he personally defeated Lewyn after the end of the massacre.

Years later, he presented the Dark tome of Loptous to Julius, Arvis and Deirdre's son. Due to possessing major Loptous Holy Blood, Julius was thus possessed by the foul spirit of Loptous. This resulted in the murder of his own mother, who sacrificed herself to prevent his sister, Julia from sharing the same fate.

In the Final Chapter of the game, Manfroy brainwashes the abducted Julia, much like what he had done to Deirdre, and uses her to battle Seliph and his advancing Liberation Army. This plan of his was ultimately foiled, as Seliph manages to rescue her by ending Manfroy's life, dispelling the mind control; indeed, the plan completely and utterly backfires, as it eventually results in Julia obtaining the Book of Naga, Loptous' only weakness, dooming Julius and, by extension, the fall of the Loptrian Empire. Alternatively, if Julius is defeated beforehand, Manfroy will die due to the power of darkness fading away. This will result in Julia being released from her trance.

In Fire Emblem: Thracia 776, it is revealed that Manfroy had a daughter, and killed his son-in-law because he disapproved of their love, causing his granddaughter, Sara, to despise him to the core. It is also heavily implied that he and his subordinate, Veld, manipulated Travant into ambushing Quan and Ethlyn in Chapter 5 of Genealogy of the Holy War in a plan to seize control of the Thracia Peninsula.

Manfroy is not a particularly challenging foe, as his heavy weapons drastically decrease his Attack Speed. However, he is protected by a swarm of Dark Mages with Sleep staves and Hel tomes, which increases the level of difficulty in reaching Velthomer to engage him in battle. Furthermore, Manfroy has an enormous amount of HP, so he will likely take a while to defeat.

“You fools! How dare you... All my life I've toiled for this moment... I'll show you no mercy!”
—Manfroy's battle quote

“Lord Julius... The Loptrian Empire... is yours...”
—Manfroy's last words if Julius is still alive in Genealogy of the Holy War.

Manfroy is illustrated in the trading card game Fire Emblem Cipher with the following cards: 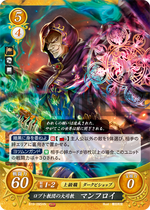 Artwork of Manfroy in Fire Emblem 0 (Cipher) by Kazuhiro Taneda.

Manfroy, as he appears in the first series of the TCG as a Level 1 Dark Bishop.

Manfroy, as he appears in the third series of the TCG as a Level 10 Dark Bishop.

Manfroy as a Dark Bishop in Fire Emblem 0 (Cipher).

Manfroy's portrait in Genealogy of the Holy War. 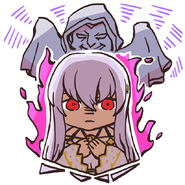