Pontifex
[view]
“I have heard of the fell creatures in Darkling Woods. L’Arachel. You will need the Stone of Rausten if we have any hope of victory.”
—Mansel

Mansel is a nonplayable character in Fire Emblem: The Sacred Stones. He is the theocratic ruler of Rausten known as the Divine Emperor.

His heir is his niece, L'Arachel, whom he has lovingly raised ever since her parents perished when she was a young girl. During the game's events he is portrayed as pious and kindly. Mansel has high authority over both political and spiritual matters.

Prior to the events of the game, Mansel excommunicated the bishop Riev due to the latter's heretical worship of the Demon King.

Mansel first appears in Chapter 19, where he greets L'Arachel and her guests to Rausten Castle. During the darkness of night, Riev and remnants of Grado's forces infiltrate the palace to shatter the final Sacred Stone. Riev also wanted to exact revenge on Mansel for his excommunication. Ephraim and Eirika protect Mansel from the attackers.

After the battle, Mansel loans Ephraim and Eirika the Rausten's Sacred Twins, Latona and Ivaldi. He is aware that he is breaking tradition as they were to never be used apart from the occasional ascension ceremony, but knows that the Demon King must be defeated at all costs. He asks them to return them after the Demon King is defeated, and gives them some funding for their mission.

He is the only Pontifex class in the franchise, a class very similar to a Civilian class in that it is unable to use weapons or magic and must be protected in order to complete the chapter.

Mansel's portrait in The Sacred Stones 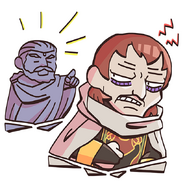 Mansel and Riev from the Fire Emblem Heroes guide.