Marcia (マーシャ Māsha, Darcia in the Italian version) is a playable character from Fire Emblem: Path of Radiance and Fire Emblem: Radiant Dawn. She is a knight of Begnion, and the younger sister of Makalov. The name of her pegasus is Apples.

A former pegasus knight of Begnion’s Holy Guard, Marcia's officially a deserter, having suddenly left the Holy Guard, ss she claims, due to her bumbling older brother who worked up a large debt. She is first encountered confronting a group of pirates in her search for her older brother, Makalov in Port Talma. During this time, the pirates refuse to cooperate with her benign request to spare her brother, to which she attempts to fight them off. While Marcia cannot be recruited in this chapter, she will return in Chapter 9 after Ike speaks to her, joining the Greil Mercenaries out of gratitude for Ike saving her. When she reunites with Makalov later on in Chapter 14, she is shown to disguise her concern and worry for him under the facade of anger and hatred. 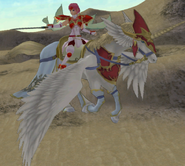 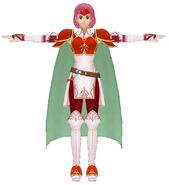