Paladin
[view]
“Nonsense! I may be getting on in years, but I'm still more than a match for the youth!”
—Marcus in a support conversation with Roy in The Binding Blade.

Marcus is a playable character in Fire Emblem: The Blazing Blade and Fire Emblem: The Binding Blade. He is a senior knight of Pherae. In both of these installments he fills the part of the Jagen type character, beginning powerful but ultimately being outclassed by other units, along with taking an early advisory role to both Roy and Eliwood in their respective titles.

He makes a brief cameo appearances in Chapter 17 and 18 of the Hasha no Tsurugi manga.

Born in a household of Knights who have served Pherae for generations, he served during Marquess Elbert’s time, and watched after Eliwood ever since his disappearance, personally teaching the nobility in the ways of war and as a martial arts instructor.

In the same way, he taught Roy the ways of fencing by the time of The Binding Blade, as well as the young vassals Alan, Lance, and Wolt. Serving within Roy’s army of gathered individuals of many talents as his primary advisor, he retired after the end of the war with Bern, but serves Pherae as a loyal retainer with his life.

Serving over three generations of parents and children of the Pherae household, Marcus acts as one would expect from being a knight, and has earned the trust of all his subordinates. Having been with Eliwood ever since he was born, he gave a lot of honest advice to him in his youth that, while it may seem a little like nagging at times, has him appreciating Marcus’s sincerity.

Thanks to his guidance, the young knights grown to be strong men, but because he strictly abides by tradition and organizational structure, Marcus often chides his subordinates, which from his standpoint, it seems inevitable. However, all the knights follow him regardless of his disposition.

An unexpected aspect of Marcus is that he is a gourmand, as shown through a support conversation with Merlinus.

Marcus is a pre-promoted paladin and is available from the beginning, and thus is one of the most useful characters in the game, particularly on Hard Mode. While his base stats are low at first glance and his growths are almost non-existent, Marcus is effectively mandatory in the early maps of Hard Mode as he's one of the only units who starts off with enough bulk to take a few hits, and will one-round in return with his Silver Lance. If he has his Iron Sword equipped instead, he will leave the enemies at low enough health for your weaker units to kill them and gain experience. His high Lance rank, versatile weapon selection, and mobility means that he can keep fighting even as he stops doubling enemies and other characters surpass him in stats. That said, unlike his younger counterpart, Marcus tends to find himself in trouble by the late game, due to most enemies being strong and well-equipped enough to overpower him. Even by Chapter 4 of Hard Mode, there are enemies he cannot double, and though he is still one of your best units for taking them on, it bodes poorly for his long-term viability. He is mainly usable after that point for his ability to ferry units around, which he does acceptably.

Marcus has been significantly buffed in The Blazing Blade, with his largest benefits being significant improvements to his weapon ranks and a very large increase in Strength. However, his larger buff is in the game around him; while enemies in Binding Blade could become very powerful, Blazing Blade enemies are rather weak by comparison. This means that Marcus's period of usability is far, far longer, to the point of more or less encompassing an entire playthrough, even on Hector Hard Mode. Able to wield all three weapon types with near-mastery, double and two-shot nearly all early enemies, and endure far more damage than most other units, along with boasting high Movement and the ability to rescue others or move after performing actions, Marcus is one of the most versatile units in the army. Only Oswin beats his durability, and most early bosses are easily crushed by his might. His offense is so absurd that in the early game, the player may be tempted to have Marcus carry someone while fighting simply so that he can leave enemies alive for other characters to kill. Some bosses, like Sealen, practically require Marcus to bring them down easily.

Marcus's only particular sticking point is his growths; while they are not nonexistent, they are low enough that one cannot rely on them, and while his base performance is incredible, it will decline noticeably over the game if he does not gain a good level or two. His Speed is a particular point; 11 Speed will double most slow and average-speed enemies, but it fails to double the quicker types or those not weighed down, especially in the lategame. If he can gain 1-2 Speed on a 25% growth, or he is given a Speedwing, he tends to stay his powerhouse self far longer; without that investment, he tends to need brave weapons to secure doubles. Even then, though, his high attacking power, along with the aforementioned Paladin traits, will make him at least worthwhile to deploy for some time. Maps like Cog of Destiny, with their excess of magic units, give him particular room to shine due to his high Movement and above-average Resistance.

In all, Marcus is an excellent unit who runs roughshod over much of the early game and midgame, can stay a powerhouse for the entire run with a little investment or a little luck, and remains usable even if not leveled at all. He is a reliable fallback who makes virtually any playthrough far easier.

“I'll show you the strength of a knight of Pherae.”
—Marcus's final battle quote

Marcus - Loyal Paladin (忠実なる聖騎士 Chūjitsunaru Seikishi)
"Marcus finally retired upon returning to Pherae. Although he tried to live in peace, he could never get rid of the endless stream of aspiring knights begging for his direction. He left his name in history as a great knight who fought with Roy and also as an outstanding teacher to the next generation."

Marcus - Knight of Pherae
"Marcus returned to Pherae with Eliwood and, as the head of the knights of Pherae, dedicated his life to training young squires."
Marcus and Merlinus
"The merchant Merlinus began working for Eliwood. He and Marcus were fast friends, and when Marcus became the head of military training, Merlinus used his business acumen to deal with all matters financial."

Marcus is illustrated in the trading card game Fire Emblem Cipher with the following cards: 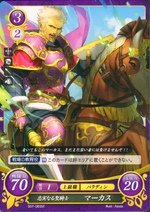 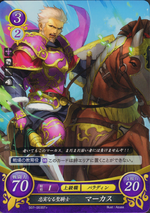 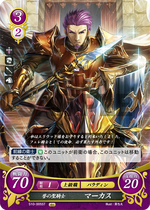