Chapter 1: The Warrior of Fiana (fought in Chapter 5: Mother and Child and joins in Chapter 12: The Thieves of Dakia)

Kayli Mills
[view]
“No, I'm a swordfighter. I am the daughter of Eyvel! I won't lose to a bunch of brigands!”
—Mareeta in Thracia 776

Mareeta is a playable character from Fire Emblem: Thracia 776. 15 years of age, she is a princess of the fallen kingdom of Rivough in Isaach and the daughter of its Prince Galzus. As a full-blooded descendant of the Crusader Od, Mareeta bears his markings on her back.

As a child, Mareeta traveled with Galzus for a time but was later abducted by slave traders and taken to Conote. Eyvel later chanced upon the slave market that Mareeta was brought to, where she found the girl chained up and in the process of being sold. Seized by a fit of rage, Eyvel killed all the guards and slave traders, thereafter rescuing and adopting Mareeta. Mareeta was then taken to the Thracian village of Fiana, where she was raised alongside Leif, Nanna, Orsin, Halvan, and Tanya.

Naturally gifted as a sword-fighter, Mareeta took up arms and joined Eyvel's Fiana Freeblades, aiding in the effort to quell the bandit uprising across the eastern coast of Thracia.

Mareeta first appears in Chapter 1, where she and Nanna are captured by Raydrik of Munster when he raids Fiana in an attempt to find Leif.

Mareeta later appears in Chapter 5, where she, having gone berserk under the influence of the Shadow Sword, is pitted against Eyvel in an arena in Munster. She is eventually withdrawn from battle, and Eyvel is petrified and kidnapped by Veld.

While Leif's army passes through Dakia Forest in Chapter 12, it is revealed that Mareeta had been taken under Saias's wing sometime after the events of Munster. Having removed the curse placed on the Shadow Sword, he entrusts the now-purified blade into Mareeta's care, emphasizing that as a true swordfighter, she must love all blades that pass through her hands. He then departs from her side, leaving her to reunite with Leif and join his skirmish against the bandits attacking the villages in the vicinity.

After Leif's army successfully secures control over Munster in Chapter 24, they embark on a mission to rescue Eyvel in Chapter 24x. Here, Sara uses the Kia Staff to undo Eyvel's petrification, reuniting Mareeta with her adoptive mother.

Mareeta will then go on to support Leif in his final battle against Veld in the Final Chapter, thereafter liberating Northern Thracia from the Grannvale Empire. She sets out on a journey to hone her swordplay skills thereafter, motivated by her shame at having had her heart taken over by the Shadow Sword. She eventually becomes a swordmaster of great renown, yet she continues to view Eyvel as her superior.

Stout of heart, Mareeta possesses a strong will that sees her bravely standing up against Raydrik even when she is captured by him. Yet beneath this façade of strength is a person riddled with insecurities. This fact becomes more prominent after she is roused from the Shadow Sword's reverie, where she is wracked by guilt over having fought Eyvel against her will.

Mareeta is also known to have a mischievous streak, which surfaces most prominently through the close bond she shares with Nanna. At the end of Thracia 776, for instance, we see her playfully pushing Nanna to confess her feelings for Leif, and much to her delight, this results in Leif proposing to Nanna.

Despite having been taken away from Galzus as a little girl, Mareeta still loves her father and wants him to be a part of her life. She's the only one who can recruit him via talking to him; in said recruitment talk she tells him that she saw him in her dreams while taken over by the Demon Sword, and adds that she remembers him as "kind, strong and gentle".

Coming with a FCM of 5, Luna, Astra at a later stage, alongside Adept on promotion and high growths, Mareeta is one of the strongest combat units in the game. She also comes with a personal weapon that hits twice in a row, provides a 20% critical bonus, and also bestows Nihil on her. With this blade on hand, Mareeta is able to consistently kill any enemies she comes across, particularly when she is well trained.

But before that, Mareeta will need a lot of training since she starts out weak, her low Defense not helping her ability to survive. The chapter she joins in offers her a fantastic opportunity to grow, allowing her to gain a few needed levels against the bandits. If no one else is using it, she can be given the Elite Sword while training to boost her EXP gain and durability, although her low base Strength can make it problematic for her to kill enemies with it.

Without her special blade, she will not be killing anything at base level. Yet if she uses the blade all the time, she will burn through its uses rapidly due to how many times she has to attack to kill anything. This means that if you want to use it when she is stronger, you will probably have to repair it. For Crusader Scrolls, the most useful ones for her are the Hoðr and Dáinn scrolls, which boost her HP and Defense respectively. They also give her small Strength boosts and help her boost her low base Strength.

Remember to have Mareeta talk to Shannam in Chapter 15 to have her learn Astra.

Sword of Stars
Foster daughter of Eyvel, mistress of Fiana. Freed from a curse, she now seeks to become a great swordmaster. Appears in Fire Emblem: Thracia 776.

The Blade's Pawn
Foster daughter of Eyvel, mistress of Fiana. As part of a wicked plot, she laid hands on a cursed sword. Appears in Fire Emblem: Thracia 776.

"Still ashamed of her lack of discipline for having been possessed by the Shadow Sword, Mareeta embarked on a journey to train and better herself—alone. Before long, she grew into a formidable swordswoman, one whose name was known throughout the continent. But no matter how well-known she became, she would always say, "I'm nothing compared to my mother.""

Mareeta is illustrated in the trading card game with the following cards: 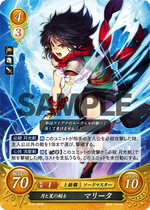 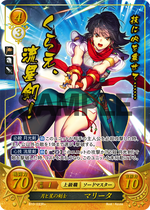 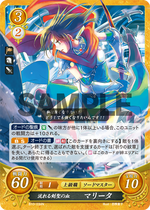 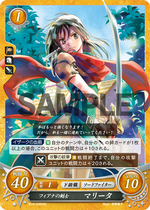 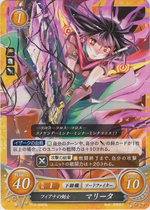 Mareeta is a variant form of the Greek Margarites, which is from Persian origin (manyari), meaning "pearl". Margarites is also related to the Daisy flower because versions of the name in other languages named the flower.