Connor Kelly-Eiding
[view]
“My father placed blunt swords at my sides when I slept to keep me from moving.”
—Marisa talking to Tethys in a support conversation

Marisa is a playable character in Fire Emblem: The Sacred Stones. She is a mercenary that join Eirika and Ephraim's armies by betraying her former employer and switching sides.

Marisa is a member of Gerik's Mercenaries. She is an aloof and detached beauty, and a master of the blade, earning fame as the "Crimson Flash" because of her great speed. She turned a mercenary to deal with the harsh methods of her father, who was also a great swordmaster. She seeks to surpass her father.

Regardless of the route, she is accidentally deployed under the hire of Grado, while Gerik and the other Mercenaries were hired by Innes. In Eirika's route, she switches sides after speaking to Gerik, not worried about what this would do to her reputation. In Ephraim's route, she switches sides after learning about the mix up from Ewan. Marisa has a secret crush on Gerik, as her supports with her friendly rival Tethys reveal.

Marisa is a quiet, blunt, stoic girl. Her aloof demeanor covers an awkward side. She is usually socially inept in every situation outside of fighting, as revealed in one of her support conversations with Gerik. Her bluntness can intimidate others and be interpreted as rudeness sometimes. She acts this way because she was always lonely and had a hard time socializing.

Marisa had a harsh childhood, being raised by her father with extremely strict methods like needing to sleep surrounded by swords (although blunt) so she would never put her guard down even when not awake. That said, she doesn't resent her family, and her dream is to surpass her father.

Marisa always looks for ways to improve herself in the battlefield, and is always prone to test her skills. She is very fixed in the goal of being a better swordmaster and the uncertainty if the war will end or if she will survive makes her even stricter with herself.

*5% less in the Japanese version

Marisa joins several chapters later at the same level as Joshua did, which makes her harder to train. Compared to Joshua, Marisa has better growths in Skill, Luck and Resistance (at least for the European version), having slightly worse growths in Strength and Defense. Despite a slightly lower Speed growth, she does have high Speed and can easily handle most attacks, although like him, she will end up sword-locked; if promoted into Swordmaster, she becomes particularly susceptible to Swordslayer-wielding users and should avoid them at all costs.

As a promotion, the Swordmaster class gives her increased critical rate, while the Assassin class allows her to use Lockpicks and grants her the Silencer ability.

Crimson Flash
An aloof swordfighter in a mercenary group led by Gerik. Her nom de guerre, Crimson Flash, strikes fear in others. Appears in Fire Emblem: The Sacred Stones.

Crimson Rabbit
Skilled mercenary called the Crimson Flash. Recieved an order to participate in the Spring Festival as a bunny. Appears in Fire Emblem: The Sacred Stones.

Eirika's route
Gerik: Is that you, Marisa?
Marisa: Chief.
Gerik: What a mess... Looks like the guild bungled. They're usually diligent about making sure this sort of thing doesn't happen. But here we are, two people of the same troop, working for opposite sides.
Marisa: What should we do?
Gerik: Aye, well, that's a good question. As a mercenary, your loyalty should always lie with the person paying your wages. You decide. We can cross blades if you want, but I'd rather you retreat. 'Course, if you betray your employer, you'll soil your sterling name.
Marisa: C'mon, chief. What would YOU like me to do?
Gerik: Well, that's easy. I'd like you to come over and join my side.
Marisa: Right. Done.
Gerik: Ho-hold on... Is that it? Just like that? You know what this will do to your reputation, right?
Marisa: Uh-huh.

Ephraim's route
Ewan: There you are, Marisa.
Marisa: Ewan? What are you doing here?
Ewan: Marisa, the mercenary guild sent you here, didn't they? They assigned you to fight under Commander Gerik, right?
Marisa: That's right. But the chief's not here.
Ewan: I know, It was all a mistake. Your commander's over there, working on another job. He wants you to join him.
Marisa: Really? He said that?
Ewan: Yep.
Marisa: I'm on my way.
Ewan: Hey, wait! Wait! Take me with you. The group's headed east, too. Let's stick with them for now.
Marisa: Very well.

“I lost...”
—Death Quote in The Sacred Stones

“My blade will cut deep.”
—Final Chapter Quote in The Sacred Stones

Conversation on Chapter 10 of Ephraim's route

Marisa, the Crimson Flash (緋閃 Hi sen)
"After the war, Marisa became battalion leader for an elite mercenary force. Many men sought to challenge her to a duel, and none of them stood up to her blade."

A Support with Gerik
"Gerik remained a mercenary, and Marisa became his company's fencing instructor. Gerik returned the affection she gave him, although he was troubled to learn she was clumsy at everything but fighting."

A Support with Joshua
"Joshua returned to Jehanna with Marisa, where she pledged service to the crown and became the top swordfighter in the land. Joshua still loved games of chance, but when it came to Marisa, she was ever the winner."

Marisa is illustrated in the trading card game Fire Emblem Cipher with the following cards: 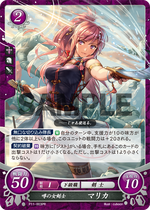 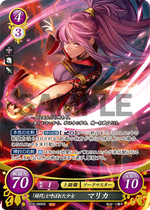 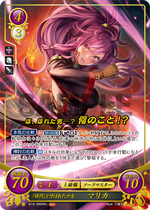 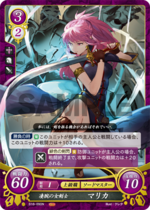 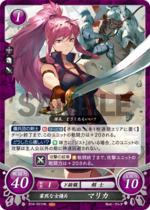