Cleric
[view]
“Really Tiki...For how long do you plan on hogging Marth!? Honestly Marth, if you dare to show even the slightest happiness, Caeda won't forgive you.”
—Marisha to Tiki

When Marth and his army attack General Lorenz, he visits the village where Marisha lives. Her grandmother tells Marth that Marisha is 10 years old, when it's later revealed that in truth she is 15. She did that to prevent Lang's soldiers finding out her true age, otherwise they would kill or capture her in the cleric's hunt. Marisha then begs Marth to let her join his battalion, since she's tired of being in hiding. When Marth accepts her to the army, her grandmother mentions that she would make an excellent bride, which made Marisha to believe that she was betrothed to the prince.

While Marisha initially has a crush on Marth, she quickly becomes close friend to Caeda, and comes to support Marth and Caeda together, as she can tell their feelings are genuine. When Medeus is defeated, in a dialogue Tiki starts cheering for Marth, which causes Marisha to tell her to stop because Caeda is in love with Marth and has had it hard, as Marth has so much responsibility that he cannot talk to her. Marisha's encouragement helps Caeda be more open to Marth about her feelings and finally have their wedding.

In the epilogue, Marisha vanishes, and Marth worries about her well being, fearing that she may had become a delinquent.

Marisha is a romantic airheaded, that dreams of finding her Prince charming. This developed into delusions about marrying royalty, specially Marth, much to Caeda’s dismay. She stalked Marth to the point of breaking on his room at night, and even solicited a reunion to arrange Marth’s marriage with her, ignoring all signs that he was already engaged. Those romantic daydreams were later transferred onto Kris when she learned that Marth was taken.

She is carefree and fun-loving, but also careless with trouble-making tendencies. She doesn’t think on her own future, nor the consequences of her actions, caring just about the immediate, and often living in situations created by her own imagination.

Visit the village in Chapter 1.

Marisha is a very useful character right from the minute she is recruited. As she is a Cleric, her ability to use staves will come in handy almost immediately, as some of your units will likely be hurt around that time. In terms of reclassing, Sage is the best option for Marisha, and though 5 points of resistance is lost, that doesn't matter much because pure waters and talismans can fix that problem. Marisha, along with her teacher Lena, is able to use the Hammerne Staff. She is also the only person who is able to use the Thief Staff.

Compared to Wrys, Marisha has inferior base stats across the board, except for Luck, which is ridiculously high for a level 1 unpromoted unit, and weapon rank, where she is 2 up on him. Eventually, however, she will surpass him in all of the other categories with the possible exceptions of Skill and Resistance. They also have about the same availability, as while Marisha is recruited in Chapter 1, Wrys first appears in Prologue IV but after the prologue does not appear until Chapter 3x.

When compared to Yuliya, Marisha really shines. Her higher hp and magic ratings cancel out that lower skill rating, which could be fixed with supports or a secret book to begin with. However, that still does not mean she should be thrown up against a group of hard-hitting opponents. Overall, she is arguably your best staff user.

Grustian Maiden Marisha
After the war she vanished without a trace, much to Marth’s worry. Perhaps she has already become a bad girl...

"Marisha vanished after the war, despite Marth's concerns. Some worried that she had become a delinquent..."

“How annoying, why here...? Lord Marth...”
—Marisha's death quote in Mystery of the Emblem

Marisha is illustrated in the trading card game Fire Emblem Cipher with the following cards: 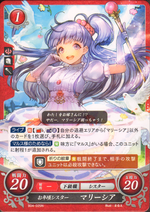 Marisha is a feminine name of Latin origin meaning "of the sea".

Official artwork of Marisha from the TCG.

Marisha as a Cleric by Marue.

Marisha, as she appears in the sixth series of the TCG as a Level 10 Priest.

Marisha, as she appears in the sixth series of the TCG as a Level 20 Bishop.

Marisha as a Cleric in Fire Emblem 0 (Cipher).

Marisha's portrait in Mystery of the Emblem.