Cindy Robinson
[view]
“Oh, dear. Such naughty children, lashing out at Lord Duma so! You've earned quite the punishment...”
—Marla

Marla is a boss character from Fire Emblem Gaiden.

Marla is the eldest daughter of Jedah and the older sister of Hestia and Sonya. She guards the Fear Mountain for Nuibaba in Chapter 4, but is defeated by Alm. She later reappears alongside Jedah and Hestia in an attempt to aid their master Duma in Chapter 5, but dies in battle. It is later revealed in Sonya's ending that Jedah intended to sacrifice Marla and Hestia to Duma.

In Sonya's base conversation, it is revealed that Marla, Hestia, and Sonya had been abandoned at a priory by Jedah. According to Sonya, while growing up at the priory, Marla was stern, but deeply kind.

When she is battled at the Fear Mountain, she will summon more Witches to help her, so it is recommended to defeat her as quickly as possible, unless if the player wants to abuse this, as Witches give a lot of experience.

According to her youngest sister, Sonya, Marla was a stern woman but deeply kind.

“May the blessings of Duma–”
—Act 5 death quote

Marla is a feminine name that is short for Marlene, which is a blend of the names Maria and Magdalene. 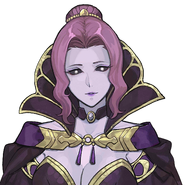