Marth (Good Smile) is an upcoming collectible statue to be released by Good Smile Company as part of their Nintendo license. This is the sixth Fire Emblem figure released by the company, and the third of their new series of figures featuring characters from new and old Fire Emblem games based off special illustrations created by the artists of their respective games. It is based off of Marth from Fire Emblem: Shadow Dragon and the Blade of Light. 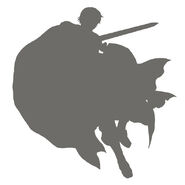 [4] A congratulations illustration done by Daisuke Izuka, celebrating the release of the figure.

[5] In-person image of the statues of Marth and Ike from WonHobby 33.

[2] Blog post regarding the new series on Fire Emblem World