Taliesin Jaffe
[view]
“Prince Albein. I am the captain of the emperor's personal guards, General Massena. The defeated soldiers who heard everything from his late Majesty have gathered in wait for you.”
—Massena talking to Alm

Massena is a general from Rigel in Fire Emblem Gaiden and captain of King Rudolf's personal guard.

Massena is the captain of Emperor Rudolf's personal guard and had been in his service for years. Prior to the Deliverance's assault on Rigel Castle, Rudolf informed Massena of his 17 year plan including the plan for Rudolf's own son, Alm to kill him. Under Rudolf's final order to him, Massena and the rest of the Rigelian army peacefully surrender after the fall of their emperor.

Inside Rigel Castle, Massenna greets Prince Alm and confirms his heritage alongside Mycen. In additional to final order to surrender, Rudolf instructed Massena to lead Alm to the deepest floor of the Castle to an underground entrance to Duma Tower. 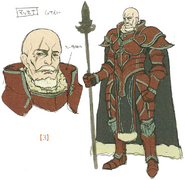 Concept artwork of Massena from Echoes: Shadows of Valentia. 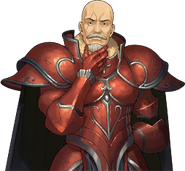