Lethality, Shurikenfaire
[view]
The Master Ninja (上忍 Jōnin, lit. High Ninja) is a combat physical class that is introduced in Fire Emblem Fates. One of the possible promotions of the Ninja class, the Master Ninja class wields Katana and Shuriken as its weapons of choice and are treated as a Hoshidan class.

Master Ninjas are dangerous units in battle, especially against spellcasters and slow opponents. They gain a varied amount of hidden bonuses (5% Hit, Avoid, Dodge and Critical), compared to classes like the Berserker who just gain a flat 20% critical rate.

Carrying shuriken, the Master Ninja is often used as a debuffing unit since hidden weapons are capable of decreasing the opponent's stats after a battle. The wide range of shuriken means that there are endless possibilities to hamper a victim in battle. Master Ninjas can be considered the ground equivalent of the Falcon Knight, which makes them useful magic killers. Their Lethality skill allows them to finish off an opponent instantly and Shurikenfaire further boosts their low damage that they usually carry. They can also use swords, although this is more of a side support as their primary weapon of choice has an advantage over them, apart from the Dual Katana. Furthermore, if confronted with Axe or Bow wielding units, Master Ninjas can respond with swords and katana or using Dual Shuriken. In addition, Master Ninjas enjoy the benefits of a slightly reduced cost when moving in mountains and forests (3 tiles for every mountain tile and 2 for forest).

Despite these advantages, the Master Ninja does have several weaknesses. Their poor Strength (along with the fact that hidden weapons deal low damage) usually prevents them from killing anything without the assistance of forged weapons and/or offensive skills. Their Defense growths are also poor, which leads to most units easily taking them out in a few hits.

The Master Ninja class is the only class that can reach an S rank with shurikens, making using the Chakram exclusive to them. The fact that hidden weapons can attack up close and a distance without a penalty (excluding stat debuffs from using Silver weapons/Soldier's Knives), their relatively high Skill and Speed, the ability to debuff enemy units and being the one of the few infantry units to provide a movement bonus when paired up makes them ideal for post-game scenarios.

Despite the fact that traditional ninja do not adopt an official uniform in reality, the Master Ninja appearing in Fates are depicted outfitted with standardized steel armor along with the same uniform as regular ninja with a slight change in color scheme to show their higher ranking. The armour they don comprise of spiked plates along the arms (excluding those worn previously on their gauntlets) and pieces of karuta plating on their chests, thighs and over the top of their boots. Generic enemy Master Ninja wear an additional spiked helmet that bear links to helmets commonly worn during the feudal Japanese era.

Jōnin were typically high ranked ninja who acted as commanders in a unit or guild during the Sengoku warring era. 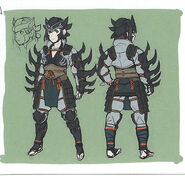 Concept art of a female Master Ninja from Fates 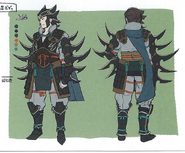 Concept art of a male Master Ninja from Fates 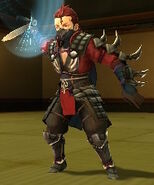 Saizo as a Master Ninja. 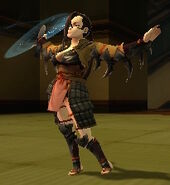