Seal Strength, Life and Death
[view]
The Master of Arms (兵法者 Heihōsha, lit. Military Strategist) is a combat physical class introduced in Fire Emblem Fates. One of the promoted forms of both the Samurai and Villager classes, the Master of Arms, like its name suggests, is proficient at wielding all types of physical weapons, save for the Yumi and Shuriken.

The Master of Arms class is extremely similar to Nohr's Great Knight, as both classes are granted the ability to wield Swords, Lances and Axes. The main differences separating the two are the fact that the Great Knight is slightly more mobile, have an A-Rank in Lances and take less damage from physical attacks, while Masters of Arms have an A-Rank in Swords and are not weak to anti-armor and anti-beast weaponry. There are also minor differences in their stats.

The Master of Arms learns two skills: Seal Strength and Life and Death. Seal Strength works extremely well against physical-oriented characters, as after a given battle, if the user is still alive, the attacker will lose six points of Strength. This can mean a great difference in battle, especially if a character runs the risk of being double attacked in combat. Life and Death, on the other hand, is a rather gimmicky skill; while it can increase the chances of winning a battle, it also increases the chances of losing it at the same time. It can be equipped on "glass cannon" units (units with high Strength/Magic but poor HP and/or Defense/Resistance), as long as they are well protected and the target cannot retaliate.

Concept artwork of the Master of Arms class from Fates. 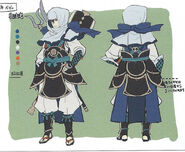