Caitlin Glass
[view]
“On the battlefield, man and woman are equals judged by skill alone.”
—Mathilda to Clive in a Support Conversation in Echoes: Shadows of Valentia

Mathilda is a playable character in Fire Emblem Gaiden. She is the founder of the Deliverance and a legendary knight of Zofia. She is 28 years old.

Mathilda is the idealizer and founder of the Deliverance rebel organization. She founded the group with Fernand and her fiancee, Clive, who turned the first leader.

She is the older among five daughters, her father was a famous soldier celebrated for his military achievements. Despite being expected to act like the other noble ladies, Mathilda has been training with her father since she was a child. She became intimate with her husband-to be when both joined the Zofia army, and their respective noble houses were also in cordial terms. At first, Clive's younger sister, Clair, disproved of their relationship and tried to keep her far away from him.

At some point, she was captured by Desaix and was planned to be executed. Her capture left Clive and the rest of group down, resulting on the newcomer Alm being chosen as a figurehead leader to inpsire and raise the morale of the army. She returned to the deliverance after being rescued during Alm's lead. After the war, she retired from the knighthood and married Clive.

If Mathilda dies during her rescue arc, Clive has a break down and regrets chosing Alm as the replacement leader. Clive blames him for losing his lover and other people that are important to him like his friend Fernand.

Mathilda is an extremely calm, courageous, and driven knight. Despite being well manered, as a result of her father's influence, she has very direct and sometimes harsh speech mannerisms. She is said to be "clever as a cat", and is very understanding and in tune with others emotions and reactions.

Mathilda is confident in her prowess as a knight, but due to her being very strong and talented, she sometimes worries about how socially acceptable it is to outshine her "lord husband" Clive. She is often worried if she hurts others feelings and anxious about how others view her, resulting on her taking criticisms by heart, be it fair or not.

In spite of Clair's initial opposition to Mathilda courting Clive, Mathilda likes Clair. She understands that her sister in law is motivated by love for her brother, and showed to be proud seeing Clair growing up and maturing during the war.

Mathilda is the best all-rounder Cavalier/Paladin/Gold Knight in Gaiden. While she winds up with the lowest HP and is tied for lowest Defense, she gets the highest Skill, Speed, Luck, and Resistance. She winds up better than Clive in everything except HP. Both Zeke and Mycen are stronger and more durable than Mathilda, but they have significantly lower Skill, Speed, and Luck. Giving Mathilda a strong weapon will benefit her more than the other horse units since she is fast enough to Double Attack many enemies that the other horse units cannot. While all of the mounted units in Gaiden are solid, Mathilda is good even for a mounted unit and can be considered one of the better units in the game. Zeke is very close to Mathilda in overall power and they can both be considered the stronger horse units.

Mathilda retains her title as arguably the overall strongest base Cavalier/Paladin in the game. While her HP growth is still arguably on the somewhat low side, her buffed growths mean that she now has the capacity to both hit harder and take hits better than she did in Gaiden, which coupled with her frequent double attacks due to her good Speed makes her a fantastic unit to have on the frontlines. Mathilda will still on average eclipse Clive in every stat except for HP pretty quickly, and generally only the much later-joining Zeke is capable of comparing to her offensive prowess, however Mathilda will still tend to double attack much more frequently. Mathilda also outshines the newcomer Conrad in terms of offense overall, but since Conrad is not on the same path as Mathilda the comparison does not matter much.

Legendary Knight
A paladin of the Deliverance and Clive's betrothed. Strong as a demon, yet gentle to her love. Appears in Fire Emblem Echoes: Shadows of Valentia.

(If Clive is alive)
"She shed her armor and became Clive's wife."
"The legendary female knight, Mathilda --"
"That name shall surely be carved within the histories of Valentia for eternity."

(If Clive is alive)
"Mathilda cast her armor aside and wed Clive. She was rarely seen in public after that, having perhaps chosen to support her husband behind the scenes instead. However, her legendary exploits as a knight are sure to live on forever in Valentian history."

(If Clive is dead)
"Clive's death forced Mathilda to carry on in his place as captain of the One Kingdom's Brotherhood of Knights. The grief in her heart steeled her, and she became a key figure in the kingdom's growth. Her legendary exploits are sure to live on forever in Valentian history." 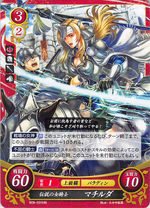 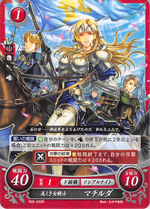