Ben Diskin
[view]
“Disguise yourself, get close to the enemy... I am familiar with these duties”
— Matthew talking to Legault in a support conversation

Matthew is a playable character in Fire Emblem: The Blazing Blade. He first joins Lyn as an enigmatic thief, and is later revealed to be a spy for Ostia. He was in a relationship with Leila before her death at the hands of Jaffar.

Matthew is first seen in Chapter 6, where he spies on the group's battle in a residential house in Araphen. When he is unexpectedly visited by Lyn, Matthew turns this turn of events to his advantage by offering to serve as a thief pilfering from the enemy's treasuries.

Later, if Matthew were to visit the house to the southeast in Chapter 7, he will furnish Hector with a report that Lundgren's motives are far too ambitious and could be a threat to Ostia if left unchecked.

In Chapter 8, Matthew temporarily leaves the group to gather intelligence from the surrounding villages. He returns with grim news: Lundgren has petitioned for aid to dispose Lyn and her "traitorous" group of knights. Lyn thanks Matthew for this advice and they push forward to Caelin.

After Lundgren is defeated and Lyn seizes control of Caelin, Matthew mysteriously disappears without a word.

A year later, Matthew's allegiance with Ostia is no longer a secret. In Chapter 11H, he joins Hector in his attempt to slip out of Castle Ostia to rendezvous with Eliwood. As they are about to depart, they are ambushed by a group of assassins deployed by the Black Fang. Together, the pair manage to defeat the assassins, thereafter succeeding in leaving the castle.

Matthew will meet Mark again in Chapter 12, where he reveals the truth of his identity as a spy in the service of Ostia. Alongside Hector, Oswin and Serra, he then joins Eliwood on his quest to search for the missing Marquess Pherae, Lord Elbert.

Later in Chapter 15E/16H, Matthew encounters Lyn again, where he very clumsily attempts to slip past her when she recognises him. He accidentally lets slip his identity as a spy and in an attempt to divert her attention from him, reminds her of the battle to retake Caelin at hand.

In Chapter 16E/17H, Matthew crosses paths with Leila, who had conscripted herself into the Black Fang. She passes on intelligence relating to Nergal and his morphs, as well as the status of Elbert and Darin. At this point, Matthew proposes to Leila in an impromptu fashion, and before she can respond, makes a quick departure.

When the army reaches the Dread Isle in Chapter 18E/19H, they stumble upon the mangled body of Leila. Beset by grief, Matthew, in a display of self-restraint, quietly requests leave to give her a proper burial. Against Hector's protests, Matthew later rejoins the army when they enter battle with Uhai, dedicating his continued persistence to Leila.

When Nergal and his morphs are later defeated, Matthew resumes his service as a spy of Ostia, motivated by the memory of his beloved Leila. Depending on his supports, Matthew could come to develop feelings for Serra. Though not explicitly stated, Matthew is implied to marry Serra, her presence slowly easing the pain of losing Leila.

Matthew's demeanor is cheerful and optimistic at best, rarely ever set back by the situations at hand, no matter how dire they may be. Carrying an air of aloofness about him, he usually tends to give sarcastic responses veiled in faux joy to most threats and conversations thrown at him, with Hector and Oswin generally being on the receiving end of his smarminess. Despite this seemingly gung-ho attitude of Matthew, he is resolutely loyal to Hector, willing to go the extra mile to help shoulder any burdens that his lord may secretly be holding.

Matthew adopts a more serious and solemn attitude following Leila's death. This extends to him developing a hatred for the Black Fang, inducing him to react with excessive outrage when Jaffar confesses to murdering Leila.

As with all Thieves and Assassins, Matthew will easily cap Speed and also possesses slightly subpar Skill but good Luck, but his Luck and Skill bases are rather low. Still, his potential in Speed and Luck is usually good enough that he is rarely put in danger from attacks, direct or otherwise. The biggest problem Matthew suffers from, like most units of this class, is Strength and, as he himself states in a support with Serra, he "does not get into brawls." He also promotes very late, as the Fell Contract is not available until Chapter 26xE/28xH. Generally, Matthew should be used primarily for stealing and finding treasure, so his growths are mostly irrelevant, though it doesn't hurt to have him pick off a kill here and there.

Faithful Spy
Happy-go-lucky spy who's actually quite sly. Serves Hector, brother of the Marquess of Ostia. Appears in Fire Emblem: The Blazing Blade.

Before chapter "The Dread Isle" 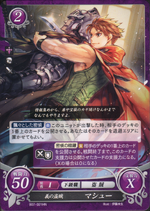 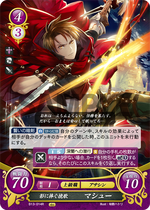 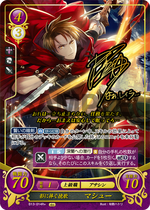 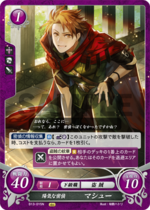