Cavalier
[view]
“They forced me to enlist- you know I hate warfare, but it was into the army or onto the chopping block.”
—Matthis in Shadow Dragon.

Matthis is a playable character from the Archanea Series of Fire Emblem. Matthis is a character who initially enlists in the Macedonian army against his will, later defecting to Marth's army on his sister's urging.

After Lena bluntly rejected the marriage proposal of Prince Michalis of Macedon and departed from the country, Matthis, her older brother, was left to face the wrath of Michalis in the wake of his humiliation. Michalis, in a state of vindictive hatred, then forced Matthis to enlist in the ranks of the Macedonian army against his will or risk being executed.

Matthis makes his first formal appearance in Chapter 4 of Shadow Dragon, where he initially takes up arms against Marth's army. He quickly defects after his sister Lena chastises him for his poor choice, however, eager to escape the oppressiveness of Michalis' merciless command. He then aids Marth in bringing the War of Shadows to an end. Thereafter, Matthis leaves the army in order to lead a life of mundane, boring serenity.

Matthis reappears in Chapter 3 of Book 2 of Mystery of the Emblem, shortly after Lena is abducted by Gharnef. Once again, he has enlisted in the ranks of the Macedonian army and taken up arms against Marth's army, but will defect when spoken to by Julian, with the intention of saving Lena with him. Matthis then helps Marth to end the War of Heroes, before returning to his former life of idleness.

Like a majority of the cast appearing in Shadow Dragon and the Blade of Light and Mystery of the Emblem, Matthis' personality is not very well developed, owing to the minor role that he plays in both games. Based on the few interactions that he engages in, however, one can still determine defining traits that form his character.

Matthis is portrayed as an individual who has an acute distaste for war and violence, preferring to lead a life of idle tranquility. His stints with the Macedonian army are entirely the result of his having been threatened with death should he not comply, and through this, one can determine that he is a rather cowardly and timid person, preferring to preserve his own personal safety and well-being over fighting for the honour of his country. His cowardice is further explicated in his conversation with Marth following his recruitment in Shadow Dragon, where he expresses a rather shameful display of fear of Marth, stuttering in his request for him to withdraw his rapier. Matthis' cowardice in this context is not without a good cause, however, as he reveals that Michalis has this sadistic tendency to deploy the most terrified-looking soldiers onto the front lines and kill those who defy him, leading him to believe that all members of royalty are just as, if not more, cruel.

Despite his flaws, Matthis is redeemed by his devotion to Lena as her older brother, where he constantly expresses concern over her welfare, to the point where he may come across as being rather obsessive at times. Through his base conversations with Kris in New Mystery of the Emblem, for one, he expresses frenzied agitation in his worry for Lena's safety, fearing that her abductors are planning "something wicked" for her. Although he comes to resolve to strengthen himself through physical training for her sake, he give up midway through, the result of his inclination to be lazy and half-hearted in the tasks that are either assigned or self-imposed.

Matthis is also supportive of romantic relationships between individuals of the same sex, as seen in his support with female Kris where he mentions he wouldn't mind if she married Lena and took care of her despite her gender.

Matthis is a very mediocre unit statistically, with bases that range from barely average to very poor and growths that veer into outright bad, especially relative to the game's other cavaliers. That said, he is also a cavalier, one of the best classes in Shadow Dragon, and therefore boasts high mobility and access to swords and javelins. This, when combined with his somewhat high Weapon Level and reasonably early joining time, mean he can be dragged out of his doldrums with some investment, and even use silver weapons relatively early. In particular, his base 7 Weapon Level allows him to wield a Silver Lance, and a high growth gives the potential to wield a Silver Sword before long. Though he's outclassed by many other cavalry units, he can still find a place in the army due to the inherent versatility of his class, and after promotion, he becomes outright viable.

Book 1's Matthis suffers noticeably from the game's nerfing of the cavalier class, with him being lancelocked on his horse and forced to dismount indoors. His gains in HP make him somewhat more sturdy, but he is overall still very mediocre.

Book 2's version of Matthis is a marked improvement, with many of his stats being noticeably buffed; in particular, his base Defense of 9 is quite high for a cavalier at that stage in the game, putting his base durability on par with Arran. His most relevant stat, however, is his high Weapon Level of 8, which, as ever, enables a wide selection of weapons. Combine this with the existence of Astral Shards to alleviate his poor growths, and he can become surprisingly competent; notably being able to tank the blows of dragons and return the favor with a Wyrmslayer even at base level. Unfortunately, Book 2 as a whole also does not favor cavalry as much in its second half, owing to the excess of terrain and indoor chapters that can force even a powerhouse like Sirius to struggle. While nearly anyone in Mystery can become good, Matthis tends to require noticeably more work to avoid falling off.

Matthis's performance in Shadow Dragon has significantly worsened since his early days. His growth rates have been bumped up somewhat, with him now possessing notably higher growths in HP and Defense. However, all his other stats remain terrible, and his prior utility as a cavalier has worsened due to the fact that other characters can reclass as one. While Matthis can reclass as well, he cannot do so effectively, as his personal base stats are nonexistent; he only has 2 HP, with everything else being generic class bases. His theoretically good durability is countered by his awful Speed growth, which means enemies may double even a raised Matthis. Due to his 0 base Luck, he faces a chance of being critted when fighting every single enemy on the roster, so he is liable to simply die if allowed to take a hit. On higher difficulties, there is simply almost nothing Matthis can do, as enemies will easily overpower him, sometimes killing him in a single round on his joining chapter. His sole good trait is his lance rank, which allows him to use javelins at base.

New Mystery sees Matthis's growths having been bumped up significantly since Mystery of the Emblem. While he remains a mediocre combatant at best, he can at least contribute on lower difficulties, and even potentially grow into a viable fighter, possessing somewhat above-average base Defense and enough base Speed to at least not be doubled. Unfortunately, his join time is a major blow against him, as at this point on higher difficulties, the enemies are much stronger than Matthis, to the point that he cannot perform well at base. Furthermore, the player can boast Luke, Roderick, and Cecil, who have had multiple chapters to grow and surpass him, including most of the prologue (when they were already on par with him at base), not to mention Arran and possibly even a reclassed Catria. Matthis has little to justify his presence, when the player has many better options for cavaliers, and his weapon ranks do not provide him with much opportunity for reclassing.

"He retired from the army and, in Macedon, casually passed his days."

"He continued passing his days casually working in Macedon."

"Matthis left the army in favor of a dull and predictable life in Macedon: to him, bliss."

"Matthis continued to while away his life in Macedon-his idyllic life."

“Lena...where have you gone? Even if it could be just once more...I had hoped to see you again.”
—Matthis's pre-battle quote

“Lena… Where are you? What I would give to hear your voice just once before I die…”
—Matthis's pre-battle quote

Matthis is illustrated in the trading card game Fire Emblem Cipher with the following cards: 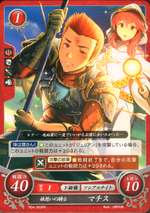