Maurice was the original bearer of a unique Crest with his name. It is said that he was among the original Ten Elites who allied with Nemesis during the War of Heroes. However, at some point he overtaxed his Crest and Hero's Relic, Blutgang, causing him to transform into a Demonic Beast. Taking residence in a forest and losing control of his body, his beast form began gruesomely killing any individual foolish enough to enter his territory. For this, he was expunged from history and forsaken, and an attempt was made to have his bloodline terminated. Contrary to common belief, Maurice would still have descendants of his own, but all inheritors of his crest were believed to be cursed, thus his Crest was renamed "the Crest of the Beast."

Over a thousand years later, rumors began to circulate that if a descendant of Maurice exists, they will transform into a Wandering Beast that stalks the forest in the Edmund territory. The attacks lead a Crest scholar with some knowledge of the Crest of the Beast to falsely accuse Marianne of being The Beast herself. Thanks to Byleth and her classmates' assistance, Marianne confronts Maurice and is able to quell his beast form, retrieving Blutgang from his corpse and ending his suffering. Marianne notes that all that remained of Maurice was the sword and human bones.

A manifestation of Maurice as it appears as part of the Phantasm Tome animation in Heroes. 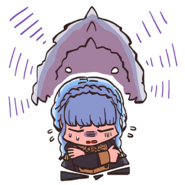