One of the promoted forms of both the Apothecary and Ninja classes, Mechanists are artisans who craft puppets and ride beast-like karakuri into battle, which functions as a projectile launcher, firing arrows and Shuriken at enemies. Mechanists are treated as a Hoshidan class in Fates.

Mechanists are characterised by their high Movement and highly prized Replicate skill. Though they are more than capable fighters in a traditional sense, one often finds them to be less desirable as compared to other units due to their low damage output and poor variation in weapon choice. If one is to employ the Mechanist class, they must be aware of the strengths and weaknesses associated with it.

The main strengths exhibited by Mechanists are their uncommonly high Movement and ability to attack from range, as well as having access to the Replicate skill. They can move 7 spaces, matching the movement of a Great Knight, and are outdone by other cavalry and flying units. This makes them excellent for softening up enemy forces before a direct engagement, or for picking off flying units that could otherwise outpace the player's forces. In this way, one can see them as effective countermeasures to the Kinshi Knight, whose Amaterasu skill runs the risk of allowing enemy forces to slowly push through the player's lines of defence.

Statistically, Mechanists have the trademark high resistance of Ninja, but aren't quite as good against magic as Master Ninja are. They also sacrifice a bit of the Ninja's high accuracy and evasion rates in favor of improved Strength and Defense. Oddly, they have an above average Defense cap in spite of their poor defense growth.

The weaknesses displayed by Mechanists take the form of general frailty and lack of utility. While their Movement is a great attribute, the player must keep them closely tied in with their main forces due to their lack of defensive durability, nullifying their usefulness in this regard. Mechanists also lack defensive talents and are not much more helpful in terms of direct support. Despite their fairly balanced stats, Mechanists do not necessarily excel at anything. Likewise, only having access to the low-Might Shuriken as an option for direct confrontations leaves much to be desired.

The class's trademark skill is excellent and arguably one of, if not the best, skill in the game because of its utility in any role. Apart from Replicate, they are rather poor units in combat, as Master Ninjas outclass them in almost any situation, in addition to providing an extra point of movement that the Mechanist cannot give in a pair up.

Karakuri are traditional Japanese dolls and figures that use clockwork-like gears and springs to perform various novelty tricks, most notably tea serving.

Concept art of a female Mechanist from Fates 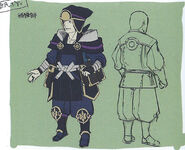 Concept art of a male Mechanist from Fates

Concept artwork of a Mechanist's mount.