Dennis Hull
[view]
“Hmph, you'll find an earth dragon like me harder to tame than Gharnef, brat. Come and face me. I'll tear the ground asunder and send you straight down to hell!”
—Medeus, when the League stormed Dolhr Keep in Chapter 24 of Shadow Dragon

He was once a prince of the Earth Dragon royal family and later the founder and Emperor of the Dolhr Empire. He was involved in all three major wars in Archanea, and was even the ultimate threat behind each one: the War of Liberation, the War of Shadows, and the War of Heroes.

While he holds the title of "Shadow Dragon", he was only truly a Dark Dragon when he was revived by Gharnef for a second time during the War of Heroes.

Medeus was the prince of the Earth Dragon royal family and lived during the Golden Age of the Dragons. However, when the decline of dragonkind began to occur, where birth rates failed and the dragons slowly began to suffer degeneration, the Divine Dragon elders proposed that dragons take on human forms as Manaketes.

While the rest of the Earth Dragons, along with many dragons, pridefully rejected the notion of becoming humans, whom many dragons viewed as insects unfit to rule in their stead, Medeus was the only one that chose to take on a Manakete form, thus being spared from degenerating into madness. The degeneration of the Earth Dragons caused a great war between them and Naga's Divine Dragon tribe, resulting in the Earth Dragons being sealed away underneath the Dragon's Table. As the last remaining Earth Dragon that had not succumbed to degeneration, Naga entrusted Medeus to guard the seal.

As Medeus guarded the seal for centuries, he would be forced to watch as his fellow Manaketes were persecuted by humans, causing the former prince to slowly grow to detest mankind.

Centuries after the founding of the Holy Kingdom of Archanea, over a millennium after the Earth Dragons were sealed away, Medeus' hatred had reached its zenith, and he founded the Dolhr Empire after uniting all the Manaketes barring Divine Dragons, the empire openly hostile towards humans who didn't accept Manaketes as their masters.

Three years later, Medeus wages war on Archanea, which was known as the War of Liberation, in retaliation for how Manaketes were treated by humans. The war had Dolhr launch an attack on the Archanean capital, which fell under Dolhr's might. However, despite Medeus' attempt to wipe out the royal family, one member, princess Artemis, would escape and sought refuge in Altea, where she would meet Anri. Despite that, the victory over Archanea resulted in Medeus soon conquering the rest of the continent and ruling over the land for five years.

Eventually, a rebellion rose that was led by Duke Cartas (who had been given the Fire Emblem by Artemis to ensure he would win), and General Ordwin of Archanea. As Dolhr's forces were pushed back, Medeus decided to enter the fray himself, and easily turned the tides as he crushed Cartas' army. As all hope seemed to be lost, Anri joined the battle, wielding Falchion, which was forged by Naga's fang to give humans the ability to fight dragons. After a ferocious battle, Medeus was slain by Anri, and the Dolhr Empire had fallen.

The War of Shadows

Despite having been killed by Anri, due to Earth Dragons possessing a substantial amount of life force, Medeus had not truly died, and was soon resurrected by Gharnef, a vengeful sorcerer who intended to use Dolhr and its allies to conquer the world, then betray Medeus and kill him using the Imhullu spell and Falchion. However, due to the resurrection being incomplete, Medeus was incapable of utilizing his full powers outside the castle.

After reviving the Dolhr Empire, Medeus made use of Gharnef's schemes to acquire human nations as allies, being Grust, Gra, and Macedon. With the power of his Empire, along with his allies, and through Gra betraying Altea, Medeus had Cornelius killed and conquered Archanea once more.

However, once again, Medeus' attempt to exterminate the Archanean royal family failed once more, as princess Nyna entered the custody and protection of Camus of Grust when he occupied the capital. Despite trying to get Camus to surrender Nyna to be personally imprisoned by Medeus himself, the knight showed no fear towards Medeus and continued to refuse. Eventually, Medeus' patience ran dry, and he ordered Bulzark, a Fire Dragon Manakete, to bring a battalion and forcibly bring Nyna to him, even permitting for Camus to be killed if he should resist. Camus, however, proved to be far more trouble, as he and his men from the Sable Order annihilated the entire battalion and Bulzark himself. This forced Medeus to personally enter and confront Camus, who was by himself at that point while Nyna and his men escaped.

While Medeus praised Camus for his skill and forcing Medeus' hand, likening him to Anri even, Medeus had Camus captured, where the knight would go through torture and humiliation as an example for defying the Earth Dragon. Camus' actions, though, allowed Nyna to eventually meet Marth, who would form and lead the Archanean League and carry the Fire Emblem, and lead an assault against the Dolhr Empire. Eventually being cornered in his palace in the Dolhr Keep, Medeus confronted Anri's descendant and unleashed his full powers, but just like before, he was slain once more, ending his reign of terror for the second time.

The War of Heroes

Unfortunately for the world, Medeus' second defeat would not last for long, as a mere three years later, Gharnef's spirit, which had been released from the Darksphere, had formulated another plan to restore Medeus to life.

Through Gharnef's schemes and manipulating Hardin's broken heart with the Darksphere, Gharnef had gathered four maidens with pure hearts: Lena, Maria, Elice, and Nyna. Through their life force, Medeus was revived in the depths of the Dragon's Table, now having morphed into his most powerful form: a true Dark Dragon. Along with that, due to over six centuries of absence from the completed Binding Shield, the seal holding the Earth Dragons began to break, allowing Medeus to take command of the ones that began to emerge.

However, due to the efforts of Marth and his allies, the Altean army had managed to gather the five Gemstones and completed the Fire Emblem once again as the Binding Shield after defeating Hardin. Thus, Marth and his army entered the Dragon's Table to put an end to Medeus, with Falchion in hand.

Entering their final battle, Medeus sent wave after wave of dragons of every kind, including Earth Dragons, though the Binding Shield banished the Earth Dragons once again. Medeus had the four maidens, now hypnotized, surround him as he was preparing to fully revive by sacrificing them.

Thankfully, the efforts of Julian, Minerva, Merric, and Sirius managed to free the four maidens from their hypnosis, and freed them from Medeus' clutches, thus giving Marth the opening he needed to confront Medeus without worry.

Despite the newfound power, Medeus was slain once more. As he perished, Medeus questioned how he could have been defeated again, and wondered if it was the power of the Binding Shield. With his last ounce of strength, Medeus warned the humans that this light they had was only a moment's respite, and that should the Binding Shield be lost again through humanity's evil, Medeus swore that he would arise from the depths of hell.

While Medeus claimed that he would return again, Gotoh's words seemed to indicate that this time Medeus was truly killed and would no longer be able to revive.

Not much is known about Medeus before he was overcome with his hatred for humanity. However, he was known to be more reasonable than the other Earth Dragons, choosing to become a Manakete to avoid the degeneration, while the rest of his kind succumbed to it. He was also apparently considered trustworthy enough by Naga to be entrusted to watch over the seal over his fellow Earth Dragons.

However, after centuries of being forced to watch his fellow Manaketes be persecuted by humans, Medeus grew to utterly despise humanity, leading him to lead a conquest against them. He even believes that his cruelty towards humans is justified, as they had done the same to the Manaketes.

Despite this, he did allow humans to serve him and allowed those that had their uses to live. He also isn't completely above giving praise to humans, as he did so to Camus when he annihilated Medeus' battalion and Bulzark, even comparing him to Anri. However, even Camus was forced to endure hardships and humiliation as an example for defying Medeus.

Medeus is known for (repeatedly) claiming that he can always return as long as there is evil in humans' hearts. This is similar to what fellow Earth Dragon Loptous claimed in Fire Emblem: Genealogy of the Holy War.

Earth-Dragon King
King of the Earth Dragons, previously defeated by the hero Anri. Resurrected by Gharnef, he seeks domination. Appears in Fire Emblem: Mystery of the Emblem.

“Rebels that dare disturb my repose…be consumed by the flames of hell!”
—Medeus's pre-battle quote

“Me? Defeated? By humans… Mere humans… Take this to heart, Altean prince, inheritor of the light… One day… I will rise anew… Never forget… As long as there is light…the darkness can never be extinguished!”
—Medeus's death quote

“I have awoken from my slumber. Rebels! You will suffer a fiery death by the flames of Hell. ”
—Medeus's battle quote in Book 1
“I... HAVE RESURRECTED... STUPID HUMANS... I WILL KILL YOU ALL...”
—Medeus's battle quote in Book 2
“Urgh... I could be... Defeated by humans... But the heart, Altea's prince, protected by the light... There will be one day... When peoples' hearts only have evil inside them, and that is when my manifestations will appear. The heart... As long as there is light, darkness will never fade away...”
—Medeus's defeat quote in Book 1
“GWA...! WHY... WHY HAVE I BEEN DEFEATED... SO EASILY...... IS THIS... THE POWER... OF NAGA'S... Binding Shield...? BUT...HUMANS, DON'T FORGET... AS LONG AS GREED LIVES ON IN YOUR HEARTS... YOU WILL LOSE THE SHIELD AND I WILL RISE FROM THE EARTH ONCE AGAIN... REMEMBER...TH...IS”
—Medeus's death quote in Book 2

“Foolish humans! You dare disturb me while I slumber? Oh, how you will regret it as you die slowly...painfully...writhing in the fires of the inferno!”
—Medeus's pre-battle quote

“Hmm? So... I am not the only dragon revived. I had heard you perished the last time. No matter; you've recovered even less of your power than me. This time, you have no chance!”
—Medeus's pre-battle quote against Nagi

“Nngh... Defeated again... by humans! Know this, Altean prince... That light which surrounds you is only a temporary respite. So long as the darkness in your hearts continues to sustain me... I cannot be... destroyed...... Rrraaahhh!!!”
—Medeus's death quote

Medeus is illustrated in the trading card game with the following cards: 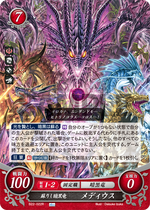