Armor Sword
[view]
“Zihark... I'm sure I still have a lot to learn... But after meeting you, I just know we'll live happily ever after!”
—Meg in her first conversation with Zihark.

Meg is a playable character from Fire Emblem: Radiant Dawn. She is the youngest daughter of Brom who hails from the village of Ohma. She travels in search of Brom's friend, Zihark, whom her father wants her to marry.

Meg first appears in a Base Conversation in which she spies on Sothe and Micaiah until they notice her. Once she clarifies that she does not have any bad intentions, they accept her into the Dawn Brigade. In a Base Conversation in Chapter 7, she finally meets Zihark and reveals her plans to wed him at her father's request. However, he does not show interest in her and instead appears to be annoyed, which she does not notice.

Although she has conversations with Brom during the chapters during which the Laguz Alliance fights the Dawn Brigade, Meg is unable to switch sides because she believes in Micaiah. She can also be spoken to by Zihark if he defects to Ike's side, but nothing will occur from it. In a similar manner to Zihark, Meg has conversations with Jill if the latter defects to the Laguz Alliance. In these scenes, it is revealed that the two of them are friends.

In the ending, it is revealed that Meg marries an unknown man and had an ordinary family. It is said that her home was always full of laughter.

Meg is a kindhearted girl who works very hard at anything that she puts her mind to. She is quite strong and it is suggested that much of her weight is muscle. She seems to be nervous and shy around some of the others, although she usually has a cheerful disposition.

* Only if Sword mastery rank is at B.

** Only if Lance mastery rank is at D or lower.

Meg is the only unpromoted Armor class unit playable in Radiant Dawn. Due to her low base stats, her abnormal growths for an Armor Knight class unit, the comparatively lower mobility of Armors, and the nature of raising units in the Dawn Brigade in which she competes with various units which are easier to work with, Meg is considered one of the most difficult characters to train, although she's still usable.

Her Strength, Skill, and Defense all grow at a slow pace for an Armor, while her, HP, Speed, Luck, and Resistance growths are all quite high to excellent, making Meg's growths somewhat lopsided. If one trains Meg, her Speed will frequently be higher than her Strength and Defense until it caps and her other stats catch up because of the low Speed caps of her class. After promoting at least once and capping Speed and eventually Luck, Meg benefits from gaining levels through Bonus Experience, which helps raise her stats with lower growths such as Strength and Defense more effectively at that point. Of all the potential Marshalls, Meg will usually have the highest Speed and Resistance if raised, having the highest caps for Marshalls in those categories by 1 and 2 points respectively. Her Strength and Defense caps are not as good as the other Marshalls like Gatrie or Brom, but they are respectable, at 36 and 35, respectively. If used enough, she can be a very effective unit in the Dawn Brigade chapters of Part 3, and is capable of being a usable mixed wall with decent Speed, which will be easily capped, similar to Gatrie. Her Strength and Defense growths are unreliable, but they are by no means so low that they will never grow, and they can be capped with effort.

To help her out early as a good defensive unit, hold on to Leonardo's Dracoshield to boost her defense, and possibly a Seraph Robe obtained from the chapter she is recruited in. Using the Energy Drop on her obtained in Chapter 1-2 is also a good idea, as both the Energy Drop and Dracoshield will increase her solid base Strength and Defense for her level by 2 each, which also will prevent her from being weighed down by the Steel Sword in her inventory.

Once trained, she can be a frontline unit comparable to the likes of Nolan, Aran, and Jill. If promoted to a Marshall in 3-13, she can potentially take down Ike, and she can and will take on many of the laguz enemies as her HP and Defense grant her durability and her Speed and Luck grant her avoid capabilities.

She can potentially be the best Endgame Marshall if used, as her high Speed, HP, Luck, and Resistance can prove effective in the Tower of Guidance. While her Strength and Defense may not be as high as Gatrie or Brom, and her Skill will be lower than Tauroneo, her stats give her potential to cap everything but Magic. Blessing the Alondite or Vague Katti could prove useful, as it can improve her already decent Defense, which can potentially reach its decent cap of 35 by that point.

Overall, Meg is an odd character with very undesirable circumstances, but her stats can be high in the long run, including her mediocre Strength, Skill, and Defense.

Meg is illustrated in the trading card game Fire Emblem Cipher with the following cards: 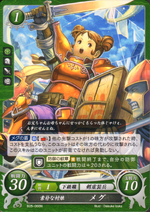 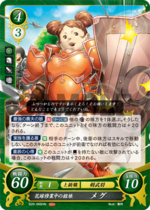 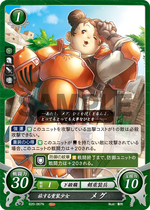