Morgan Berry
[view]
“I... I don't regret leaving Bern with Princess Guinivere. But Bern is still my home... It is painful to fight against my former allies.”
—Melady in a support conversation with Yoder

Melady is a playable character in Fire Emblem: The Binding Blade. She is a renowned knight of Bern and captain of Princess Guinivere's guards. She has a younger brother, Zeiss.

She is willing to follow Guinivere and join the Lycian Army despite the risk of being labeled a traitor and leaving her country, family and lover, Galle, behind.

Her wyvern is named Tryffin.

Melady, by her own admission, considers herself entrusted to Guinivere first and Bern second. She seems to have little love for the actions of her country, spending most of the war searching for Guinivere rather than attempting to aid in the fighting. She is a true believer in her oaths, considering her humiliation and loss of status to be no object when it comes to keeping them fulfilled.

Melady, though a traitor to Bern, still feels a good deal of remorse for the actions of its army, as she was an officer and therefore at least complicit in the terror wrought in its name, as well as many of her old colleagues now being her enemies. She is fairly stiff and serious in her attitudes as a result, and can be especially cagey around people who have personally suffered due to Bern's actions, particularly Lugh. She is slow to form relationships outside of people whom she personally knew before the war, and consequently, is rather surprised when others attempt to speak with her. Trec is one of the people to get through her shell, and she enjoys his company due to his spacey nature breaking the ice between them.

Melady is anguished when facing Galle, whom she cared deeply for. She fondly remembers their time together, but is waylaid by the fact that Galle chose the opposite to her; while she considered her oath to be towards Guinivere, Galle considered it to be towards Zephiel. She questions her own oaths at points, wondering if her own actions carry to Tryfinn, who follows her instructions as surely as she followed Guinivere's, meaning that her self-sacrifice harmed those around her. Nonetheless, she ultimately works past it on Yoder's advice.

As the player's first Wyvern Rider, Melady does not disappoint. All of her stats save for Luck and Resistance are well above average, her growths are good in all the right areas, and she has the perks of being a flier. Her decent Constitution also allows her to use the heavier lances with less effort than Shanna and Thea, and with a C-rank, she can use the Killer Lance, which is conveniently buyable in her joining chapter. She can easily hold her own while unpromoted, and her flying utility will be very useful for the next few chapters after you get her. Many of the later maps in Binding Blade rely on terrain or impassable obstacles like mountains and water, which Melady can freely trivialize, with her high durability enabling her to face foes that Shanna and Thea struggle with.

In Normal Mode, though somewhat overshadowed by Shanna, Melady is easily the second best flying unit, blowing Thea out of the water statistically. She is tanky, strong, has a good lance rank, and fills an uncommon niche. However, in Hard Mode, Melady is arguably the largest beneficiary of its bonuses of any recruitable unit. She has the equivalent of ten extra levels in Wyvern Rider class growths added onto her already above-average stats, and the result is a combat juggernaut. Even the exceptionally powerful enemies of Hard Mode struggle to do significant damage to her, and when equipped with a Killer Lance, or in some cases even an Iron Lance or Javelin, she is one of the only characters who reliably one-rounds. When leveled to any degree and/or promoted, Melady is capable of charging on ahead of the rest of the army and wiping out entire formations of enemies solo.

Melady's weaknesses on Hard Mode are minor, but still worth considering. She has very low Resistance and is weak to bows, though her sheer bulk and solid Speed should still let her dodge or survive most hits. Aircalibur is by far her biggest bane, as it hits on Resistance and has anti-flier properties. This can be alleviated through the Delphi Shield in Retaking the Capital, which will make Aircalibur mostly a nonissue. While her Speed is good, it is often a point or two away from doubling faster enemies in the following chapters (and she shouldn't even bother with the overly-heavy Steel Lances), which means she may need an early promotion, a Speedwings, or some luck with her 45% growth to reach her full potential. Lastly, low Resistance will make her a target for status staves, and curing her can be problematic when she is usually off on her own.

Promotion can be done at any time, with a relatively uncontested item in the Elysian Whip, and it will push her limits even further, with its well-rounded stat gains (most notably HP) and the addition of the high-accuracy swords to her arsenal making her all the more untouchable and pushing her past certain doubling thresholds. Melady is at the perfect level, as well: she has enough in her stats to be promoted immediately and stay viable, but is low enough level and has good enough growths that her gaining another few levels isn't difficult. She will usually cap HP, Strength, Speed, and Skill, and her Defense will be among the best in the army.

Her brother will usually pale in comparison as he joins later and weaker and only has slightly better Strength and Defense in return. Zeiss is one of Melady's few support partners that can keep up with her, however. Both Zeiss and Trec will give Melady a good boost to her critical rate.

In all, Melady is a very good choice in Normal Mode, and likely the strongest unit in the game in Hard Mode, owing to her excellent class, her combat prowess, and the massive gains she receives on the higher of the two difficulties. There is simply no other unit in the game that can match her mixture of flight, power, and durability, and her weaknesses are fairly easy to patch. Using her is highly recommended.

Crimson Rider
A wyvern rider who accompanies Guinivere. Though she is conflicted about opposing her homeland, she is loyal to her lady. Appears in Fire Emblem: The Binding Blade.

Narcian: You're Melady... Hah! You betray your home and join the enemy. You are a disgrace!
Melady: My loyalty has always lied with the princess. And so it shall remain!

Melady is illustrated in the trading card game Fire Emblem Cipher with the following cards: 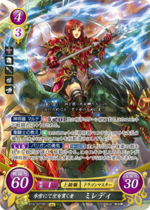 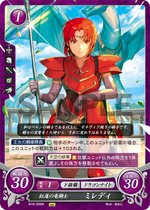 'Melady' may take its reference from the character 'Milady de Winter' of The Three Muskateers. She was the wife of Athos and one of the chief antagonists.