Map 17: Warriors of the Plains

“Lord Kernel, we're under attack from forces to the northeast and south. We can't possibly hold out against both.”
—Melisal, in a conversation with Kernel

Melisal (メリサール Merisāru, fan translated as Marshall) is an enemy character from TearRing Saga: Utna Heroes Saga. He is a bishop under the command of Kernel, and one of the three bosses of Map 17. When Kernel decides to escape to Balt Fortress, Melisal is ordered to defend Selba Castle from Lionheart's forces instead of surrendering. He eventually dies fighting against Lionheart's and Runan's armies.

“This is as far as you go. You cowardly dogs cannot hide anymore!”
—Melisal's battle quote 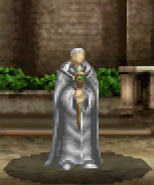