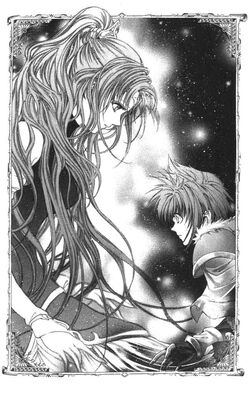 Melitha is a manga character in Fire Emblem: Hasha no Tsurugi. She is the mother of Al and lover of Hartmut. She is also a dragon, specifically an archdragon. Both because she is a dragon and Hartmut loved her and couldn't bear to kill her, Hartmut sealed her and Al for many years. Later she was unsealed by the Blackbone Clan, and while running away from them with Magough and Al, she was killed while protecting Al from an arrow. While dying, she transforms herself into the Champion's Sword, which she instructs Magough to give to Al when the time is right. Right before the final battle with Audamorze, she encourages Al that he can defeat Audamorze even without his power as a half dragon.

Retrieved from "https://fireemblem.fandom.com/wiki/Melitha?oldid=543150"
Community content is available under CC-BY-SA unless otherwise noted.